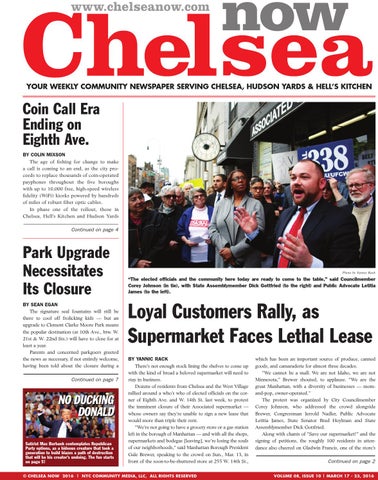 Coin Call Era Ending on Eighth Ave. BY COLIN MIXSON The age of fishing for change to make a call is coming to an end, as the city proceeds to replace thousands of coin-operated payphones throughout the five boroughs with up to 10,000 free, high-speed wireless fidelity (WiFi) kiosks powered by hundreds of miles of robust fiber optic cables. In phase one of the rollout, those in Chelsea, Hell’s Kitchen and Hudson Yards Continued on page 4

Park Upgrade Necessitates Its Closure BY SEAN EGAN The signature seal fountains will still be there to cool off frolicking kids — but an upgrade to Clement Clarke Moore Park means the popular destination (at 10th Ave., btw. W. 21st & W. 22nd Sts.) will have to close for at least a year. Parents and concerned parkgoers greeted the news as necessary, if not entirely welcome, having been told about the closure during a Continued on page 7

NO DUCKING DONALD Satirist Max Burbank contemplates Republican Party options, as a hideous creature that took a generation to build blazes a path of destruction that will be his creator’s undoing. The fun starts on page 5!

“The elected officials and the community here today are ready to come to the table,” said Councilmember Corey Johnson (in tie), with State Assemblymember Dick Gottfried (to the right) and Public Advocate Letitia James (to the left).

Loyal Customers Rally, as Supermarket Faces Lethal Lease BY YANNIC RACK There’s not enough stock lining the shelves to come up with the kind of bread a beloved supermarket will need to stay in business. Dozens of residents from Chelsea and the West Village rallied around a who’s who of elected officials on the corner of Eighth Ave. and W. 14th St. last week, to protest the imminent closure of their Associated supermarket — whose owners say they’re unable to sign a new lease that would more than triple their rent. “We’re not going to have a grocery store or a gas station left in the borough of Manhattan — and with all the shops, supermarkets and bodegas [leaving], we’re losing the souls of our neighborhoods,” said Manhattan Borough President Gale Brewer, speaking to the crowd on Sun., Mar. 13, in front of the soon-to-be-shuttered store at 255 W. 14th St.,

which has been an important source of produce, canned goods, and camaraderie for almost three decades. “We cannot be a mall. We are not Idaho, we are not Minnesota,” Brewer shouted, to applause. “We are the great Manhattan, with a diversity of businesses — momand-pop, owner-operated.” The protest was organized by City Councilmember Corey Johnson, who addressed the crowd alongside Brewer, Congressman Jerrold Nadler, Public Advocate Letitia James, State Senator Brad Hoylman and State Assemblymember Dick Gottfried. Along with chants of “Save our supermarket!” and the signing of petitions, the roughly 100 residents in attendance also cheered on Gladwin Francis, one of the store’s