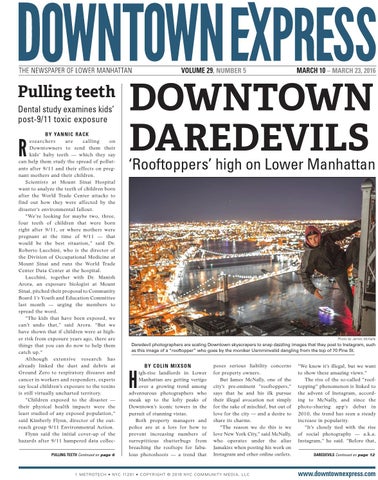 Pulling teeth Dental study examines kids’ post-9/11 toxic exposure B Y YA N N I C R A C K esearchers are calling on Downtowners to send them their kids’ baby teeth — which they say can help them study the spread of pollutants after 9/11 and their effects on pregnant mothers and their children. Scientists at Mount Sinai Hospital want to analyze the teeth of children born after the World Trade Center attacks to find out how they were affected by the disaster’s environmental fallout. “We’re looking for maybe two, three, four teeth of children that were born right after 9/11, or where mothers were pregnant at the time of 9/11 — that would be the best situation,” said Dr. Roberto Lucchini, who is the director of the Division of Occupational Medicine at Mount Sinai and runs the World Trade Center Data Center at the hospital. Lucchini, together with Dr. Manish Arora, an exposure biologist at Mount Sinai, pitched their proposal to Community Board 1’s Youth and Education Committee last month — urging the members to spread the word. “The kids that have been exposed, we can’t undo that,” said Arora. “But we have shown that if children were at higher risk from exposure years ago, there are things that you can do now to help them catch up.” Although extensive research has already linked the dust and debris at Ground Zero to respiratory diseases and cancer in workers and responders, experts say local children’s exposure to the toxins is still virtually uncharted territory. “Children exposed to the disaster — their physical health impacts were the least studied of any exposed population,” said Kimberly Flynn, director of the outreach group 9/11 Environmental Action. Flynn said the initial cover-up of the hazards after 9/11 hampered data collec-

Daredevil photographers are scaling Downtown skyscrapers to snap dazzling images that they post to Instagram, such as this image of a “rooftopper” who goes by the moniker Usrnminvalid dangling from the top of 70 Pine St.

BY COL IN MIXSON igh-rise landlords in Lower Manhattan are getting vertigo over a growing trend among adventurous photographers who sneak up to the lofty peaks of Downtown’s iconic towers in the pursuit of stunning vistas. Both property managers and police are at a loss for how to prevent increasing numbers of surreptitious shutterbugs from breaching the rooftops for fabulous photoshoots — a trend that

poses serious liability concerns for property owners. But James McNally, one of the city’s pre-eminent “rooftoppers,” says that he and his ilk pursue their illegal avocation not simply for the sake of mischief, but out of love for the city — and a desire to share its charms. “The reason we do this is we love New York City,” said McNally, who operates under the alias Jamakiss when posting his work on Instagram and other online outlets.

“We know it’s illegal, but we want to show these amazing views.” The rise of the so-called “rooftopping” phenomenon is linked to the advent of Instagram, according to McNally, and since the photo-sharing app’s debut in 2010, the trend has seen a steady increase in popularity. “It’s closely tied with the rise of social photography — a.k.a. Instagram,” he said. “Before that, DAREDEVILS Continued on page 12