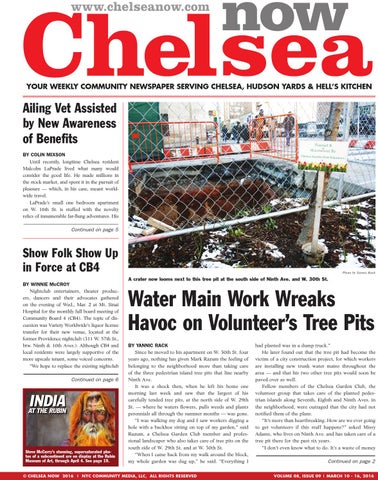 Ailing Vet Assisted by New Awareness of Benefits BY COLIN MIXSON Until recently, longtime Chelsea resident Malcolm LaPrade lived what many would consider the good life. He made millions in the stock market, and spent it in the pursuit of pleasure — which, in his case, meant worldwide travel. LaPrade’s small one bedroom apartment on W. 16th St. is stuffed with the novelty relics of innumerable far-flung adventures. His Continued on page 5

Show Folk Show Up in Force at CB4 BY WINNIE McCROY Nightclub entertainers, theater producers, dancers and their advocates gathered on the evening of Wed., Mar. 2 at Mt. Sinai Hospital for the monthly full board meeting of Community Board 4 (CB4). The topic of discussion was Variety Worldwide’s liquor license transfer for their new venue, located at the former Providence nightclub (311 W. 57th St., btw. Ninth & 10th Aves.). Although CB4 and local residents were largely supportive of the more upscale tenant, some voiced concerns. “We hope to replace the existing nightclub Continued on page 6

Steve McCurry’s stunning, supersaturated photos of a subcontinent are on display at the Rubin Museum of Art, through April 4. See page 19.

A crater now looms next to this tree pit at the south side of Ninth Ave. and W. 30th St.

Water Main Work Wreaks Havoc on Volunteer’s Tree Pits BY YANNIC RACK Since he moved to his apartment on W. 30th St. four years ago, nothing has given Mark Razum the feeling of belonging to the neighborhood more than taking care of the three pedestrian island tree pits that line nearby Ninth Ave. It was a shock then, when he left his home one morning last week and saw that the largest of his carefully tended tree pits, at the north side of W. 29th St. — where he waters flowers, pulls weeds and plants perennials all through the summer months — was gone. “I was walking my dog and I saw workers digging a hole with a backhoe sitting on top of my garden,” said Razum, a Chelsea Garden Club member and professional landscaper who also takes care of tree pits on the south side of W. 29th St. and at W. 30th St. “When I came back from my walk around the block, my whole garden was dug up,” he said. “Everything I

had planted was in a dump truck.” He later found out that the tree pit had become the victim of a city construction project, for which workers are installing new trunk water mains throughout the area — and that his two other tree pits would soon be paved over as well. Fellow members of the Chelsea Garden Club, the volunteer group that takes care of the planted pedestrian islands along Seventh, Eighth and Ninth Aves. in the neighborhood, were outraged that the city had not notified them of the plans. “It’s more than heartbreaking. How are we ever going to get volunteers if this stuff happens?” asked Missy Adams, who lives on Ninth Ave. and has taken care of a tree pit there for the past six years. “I don’t even know what to do. It’s a waste of money