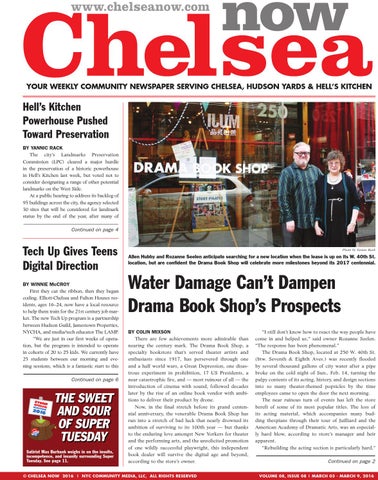 Hell’s Kitchen Powerhouse Pushed Toward Preservation BY YANNIC RACK The city’s Landmarks Preservation Commission (LPC) cleared a major hurdle in the preservation of a historic powerhouse in Hell’s Kitchen last week, but voted not to consider designating a range of other potential landmarks on the West Side. At a public hearing to address its backlog of 95 buildings across the city, the agency selected 30 sites that will be considered for landmark status by the end of the year, after many of Continued on page 4

Tech Up Gives Teens Digital Direction BY WINNIE McCROY First they cut the ribbon, then they began coding. Elliott-Chelsea and Fulton Houses residents, ages 16–24, now have a local resource to help them train for the 21st century job market. The new Tech Up program is a partnership between Hudson Guild, Jamestown Properties, NYCHA, and media/tech educator The LAMP. “We are just in our first weeks of operation, but the program is intended to operate in cohorts of 20 to 25 kids. We currently have 25 students between our morning and evening sessions, which is a fantastic start to this Continued on page 6

THE SWEET AND SOUR OF SUPER TUESDAY Satirist Max Burbank weighs in on the insults, incompetence, and insanity surrounding Super Tuesday. See page 11.

Allen Hubby and Rozanne Seelen anticipate searching for a new location when the lease is up on its W. 40th St. location, but are confident the Drama Book Shop will celebrate more milestones beyond its 2017 centennial.

Water Damage Can’t Dampen Drama Book Shop’s Prospects BY COLIN MIXSON There are few achievements more admirable than nearing the century mark. The Drama Book Shop, a specialty bookstore that’s served theater artists and enthusiasts since 1917, has persevered through one and a half world wars, a Great Depression, one disastrous experiment in prohibition, 17 US Presidents, a near catastrophic fire, and — most ruinous of all — the introduction of cinema with sound, followed decades later by the rise of an online book vendor with ambitions to deliver their product by drone. Now, in the final stretch before its grand centennial anniversary, the venerable Drama Book Shop has run into a stretch of bad luck that nearly drowned its ambition of surviving to its 100th year — but thanks to the enduring love amongst New Yorkers for theater and the performing arts, and the unsolicited promotion of one wildly successful playwright, this independent book dealer will survive the digital age and beyond, according to the store’s owner.

“I still don’t know how to react the way people have come in and helped us,” said owner Rozanne Seelen. “The response has been phenomenal.” The Drama Book Shop, located at 250 W. 40th St. (btw. Seventh & Eighth Aves.) was recently flooded by several thousand gallons of city water after a pipe broke on the cold night of Sun., Feb. 14, turning the pulpy contents of its acting, history, and design sections into so many theater-themed popsicles by the time employees came to open the door the next morning. The near ruinous turn of events has left the store bereft of some of its most popular titles. The loss of its acting material, which accompanies many budding thespians through their tour of Juilliard and the American Academy of Dramatic Arts, was an especially hard blow, according to store’s manager and heir apparent. “Rebuilding the acting section is particularly hard,”