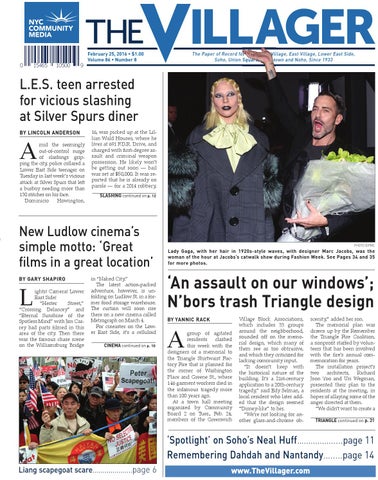 mid the seemingly out-of-control surge of slashings gripping the city, police collared a Lower East Side teenager on Tuesday in last week’s vicious attack at Silver Spurs that left a busboy needing more than 130 stitches on his face. Dominicio Howington,

16, was picked up at the Lillian Wald Houses, where he lives at 691 F.D.R. Drive, and charged with first-degree assault and criminal weapon possession. He likely won’t be getting out soon — bail was set at $50,000. It was reported that he is already on parole — for a 2014 robbery, SLASHING continued on p. 12

ights! Camera! Lower East Side! “Hester Street,” “Crossing Delancey” and “Eternal Sunshine of the Spotless Mind” with Jim Carrey had parts filmed in this area of the city. Then there was the famous chase scene on the Williamsburg Bridge

in “Naked City.” The latest action-packed adventure, however, is unfolding on Ludlow St. in a former food storage warehouse. The curtain will soon rise there on a new cinema called Metrograph on March 4. For cineastes on the Lower East Side, it’s a celluloid CINEMA continued on p. 10

Lady Gaga, with her hair in 1920s-style waves, with designer Marc Jacobs, was the woman of the hour at Jacobs’s catwalk show during Fashion Week. See Pages 34 and 35 for more photos.

‘An assault on our windows’; N’bors trash Triangle design BY YANNIC RACK

group of agitated residents clashed this week with the designers of a memorial to the Triangle Shirtwaist Factory Fire that is planned for the corner of Washington Place and Greene St., where 146 garment workers died in the infamous tragedy more than 100 years ago. At a town hall meeting organized by Community Board 2 on Tues., Feb. 24, members of the Greenwich

Village Block Associations, which includes 33 groups around the neighborhood, sounded off on the memorial design, which many of them see as too obtrusive, and which they criticized for lacking community input. “It doesn’t keep with the historical nature of the building. It’s a 21st-century application to a 20th-century tragedy,” said Edy Selman, a local resident who later added that the design seemed “Disney-like” to her. “We’re not looking for another glass-and-chrome ob-

scenity,” added her son. The memorial plan was drawn up by the Remember the Triangle Fire Coalition, a nonprofit staffed by volunteers that has been involved with the fire’s annual commemoration for years. The installation project’s two architects, Richard Joon Yoo and Uri Wegman, presented their plan to the residents at the meeting, in hopes of allaying some of the anger directed at them. “We didn’t want to create a TRIANGLE continued on p. 31