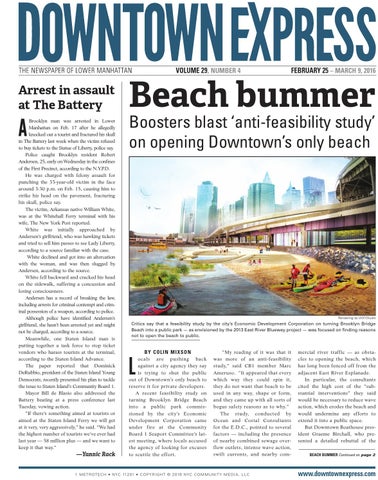 Arrest in assault at The Battery

Brooklyn man was arrested in Lower Manhattan on Feb. 17 after he allegedly knocked out a tourist and fractured his skull in The Battery last week when the victim refused to buy tickets to the Statue of Liberty, police say. Police caught Brooklyn resident Robert Andersen, 25, early on Wednesday in the confines of the First Precinct, according to the N.Y.P.D. He was charged with felony assault for punching the 33-year-old victim in the face around 3:30 p.m. on Feb. 15, causing him to strike his head on the pavement, fracturing his skull, police say. The victim, Arkansas native William White, was at the Whitehall Ferry terminal with his wife, The New York Post reported. White was initially approached by Andersen’s girlfriend, who was hawking tickets and tried to sell him passes to see Lady Liberty, according to a source familiar with the case. White declined and got into an altercation with the woman, and was then slugged by Andersen, according to the source. White fell backward and cracked his head on the sidewalk, suffering a concussion and losing consciousness. Andersen has a record of breaking the law, including arrests for criminal contempt and criminal possession of a weapon, according to police. Although police have identified Andersen’s girlfriend, she hasn’t been arrested yet and might not be charged, according to a source. Meanwhile, one Staten Island man is putting together a task force to stop ticket vendors who harass tourists at the terminal, according to the Staten Island Advance. The paper reported that Dominick DeRubbio, president of the Staten Island Young Democrats, recently presented his plan to tackle the issue to Staten Island’s Community Board 1. Mayor Bill de Blasio also addressed the Battery beating at a press conference last Tuesday, vowing action. “If there’s something aimed at tourists or aimed at the Staten Island Ferry we will get at it very, very aggressively,” he said. “We had the highest number of tourists we’ve ever had last year — 58 million plus — and we want to keep it that way.”

Critics say that a feasibility study by the city’s Economic Development Corporation on turning Brooklyn Bridge Beach into a public park — as envisioned by the 2013 East River Blueway project — was focused on finding reasons not to open the beach to public.

BY COL IN MIXSON ocals are pushing back against a city agency they say is trying to shut the public out of Downtown’s only beach to reserve it for private developers. A recent feasibility study on turning Brooklyn Bridge Beach into a public park commissioned by the city’s Economic Development Corporation came under fire at the Community Board 1 Seaport Committee’s latest meeting, where locals accused the agency of looking for excuses to scuttle the effort.

“My reading of it was that it was more of an anti-feasibility study,” said CB1 member Marc Ameruso. “It appeared that every which way they could spin it, they do not want that beach to be used in any way, shape or form, and they came up with all sorts of bogus safety reasons as to why.” The study, conducted by Ocean and Costal Consultants for the E.D.C., pointed to several factors — including the presence of nearby combined sewage overflow outlets, intense wave action, swift currents, and nearby com-

mercial river traffic — as obstacles to opening the beach, which has long been fenced off from the adjacent East River Esplanade. In particular, the consultants cited the high cost of the “substantial interventions” they said would be necessary to reduce wave action, which erodes the beach and would undermine any efforts to extend it into a public space. But Downtown Boathouse president Graeme Birchall, who presented a detailed rebuttal of the BEACH BUMMER Continued on page 2