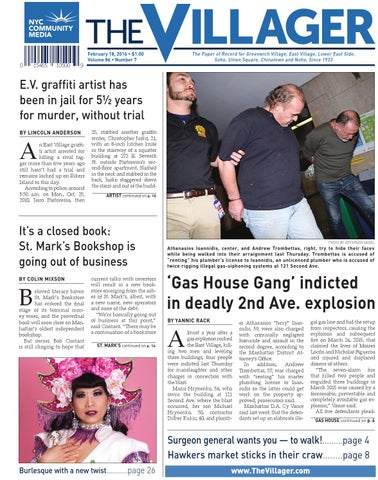 E.V. graffiti artist has been in jail for 5½ years for murder, without trial BY LINCOLN ANDERSON

n East Village graffiti artist arrested for killing a rival tagger more than five years ago still hasn’t had a trial and remains locked up on Rikers Island to this day. According to police, around 5:30 a.m. on Mon., Oct. 25, 2010, Jairo Pastoressa, then

25, stabbed another graffiti writer, Christopher Jusko, 21, with an 8-inch kitchen knife in the stairway of a squatter building at 272 E. Seventh St. outside Pastoressa’s second-floor apartment. Slashed in the neck and stabbed in the back, Jusko staggered down the stairs and out of the buildARTIST continued on p. 10

It’s a closed book: St. Mark’s Bookshop is going out of business BY COLIN MIXSON

eloved literary haven St. Mark’s Bookstore has entered the final stage of its terminal money woes, and the proverbial book will soon close on Manhattan’s oldest independent bookshop. But owner Bob Contant is still clinging to hope that

current talks with investors will result in a new bookstore emerging from the ashes of St. Mark’s, albeit, with a new name, new operators and none of the debt. “We’re basically going out of business at this point,” said Contant. “There may be a continuation of a bookstore ST. MARK’S continued on p. 14

Athanasios Ioannidis, center, and Andrew Trombettas, right, try to hide their faces while being walked into their arraignment last Thursday. Trombettas is accused of “renting” his plumber’s license to Ioannidis, an unlicensed plumber who is accused of twice rigging illegal gas-siphoning systems at 121 Second Ave.

lmost a year after a gas explosion rocked the East Village, killing two men and leveling three buildings, four people were indicted last Thursday for manslaughter and other charges in connection with the blast. Maria Hrynenko, 56, who owns the building at 121 Second Ave. where the blast occurred, her son Michael Hrynenko, 30, contractor Dilber Kukic, 40, and plumb-

er Athanasios “Jerry” Ioannidis, 59, were also charged with criminally negligent homicide and assault in the second degree, according to the Manhattan District Attorney’s Office. In addition, Andrew Trombettas, 57, was charged with “renting” his master plumbing license to Ioannidis so the latter could get work on the property approved, prosecutors said. Manhattan D.A. Cy Vance said last week that the defendants set up an elaborate ille-

gal gas line and hid the setup from inspectors, causing the explosion and subsequent fire on March 26, 2015, that claimed the lives of Moises Locón and Nicholas Figueroa and injured and displaced dozens of others. “The seven-alarm fire that killed two people and engulfed three buildings in March 2015 was caused by a foreseeable, preventable and completely avoidable gas explosion,” Vance said. All five defendants pleadGAS HOUSE continued on p. 6