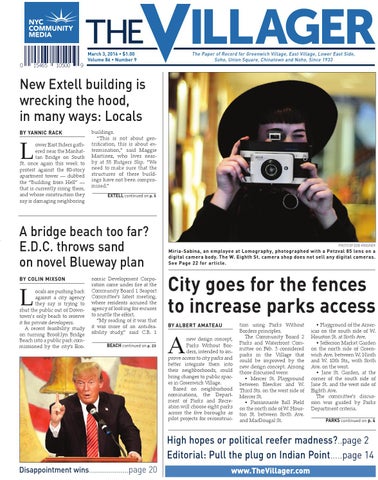 New Extell building is wrecking the hood, in many ways: Locals BY YANNIC RACK

ower East Siders gathered near the Manhattan Bridge on South St. once again this week to protest against the 80-story apartment tower — dubbed the “Building from Hell” — that is currently rising there, and whose construction they say is damaging neighboring

buildings. “This is not about gentrification, this is about extermination,” said Maggie Martinez, who lives nearby at 55 Rutgers Slip. “We need to make sure that the structures of these buildings have not been compromised.” EXTELL continued on p. 5

ocals are pushing back against a city agency they say is trying to shut the public out of Downtown’s only beach to reserve it for private developers. A recent feasibility study on turning Brooklyn Bridge Beach into a public park commissioned by the city’s Eco-

nomic Development Corporation came under fire at the Community Board 1 Seaport Committee’s latest meeting, where residents accused the agency of looking for excuses to scuttle the effort. “My reading of it was that it was more of an anti-feasibility study,” said C.B. 1 BEACH continued on p. 23

Miria-Sabina, an employee at Lomography, photographed with a Petzval 85 lens on a digital camera body. The W. Eighth St. camera shop does not sell any digital cameras. See Page 22 for article.

new design concept, Parks Without Borders, intended to improve access to city parks and better integrate them into their neighborhoods, could bring changes to public spaces in Greenwich Village. Based on neighborhood nominations, the Department of Parks and Recreation will choose eight parks across the five boroughs as pilot projects for reconstruc-

tion using Parks Without Borders principles. The Community Board 2 Parks and Waterfront Committee on Feb. 3 considered parks in the Village that could be improved by the new design concept. Among those discussed were: • Mercer St. Playground between Bleecker and W. Third Sts. on the west side of Mercer St. • Passannante Ball Field on the north side of W. Houston St. between Sixth Ave. and MacDougal St.

• Playground of the Americas on the south side of W. Houston St. at Sixth Ave. • Jefferson Market Garden on the north side of Greenwich Ave. between W. Ninth and W. 10th Sts., with Sixth Ave. on the west. • Jane St. Garden, at the corner of the south side of Jane St. and the west side of Eighth Ave. The committee’s discussion was guided by Parks Department criteria. PARKS continued on p. 4