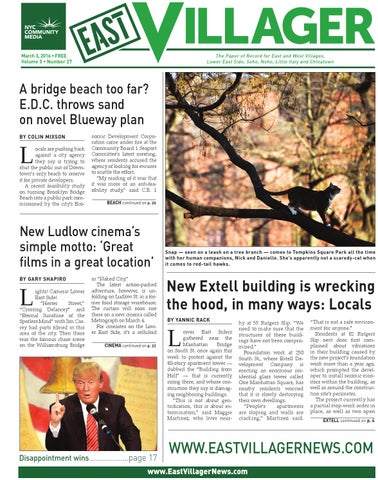 ocals are pushing back against a city agency they say is trying to shut the public out of Downtown’s only beach to reserve it for private developers. A recent feasibility study on turning Brooklyn Bridge Beach into a public park commissioned by the city’s Eco-

nomic Development Corporation came under fire at the Community Board 1 Seaport Committee’s latest meeting, where residents accused the agency of looking for excuses to scuttle the effort. “My reading of it was that it was more of an anti-feasibility study,” said C.B. 1 BEACH continued on p. 20

ights! Camera! Lower East Side! “Hester Street,” “Crossing Delancey” and “Eternal Sunshine of the Spotless Mind” with Jim Carrey had parts filmed in this area of the city. Then there was the famous chase scene on the Williamsburg Bridge

in “Naked City.” The latest action-packed adventure, however, is unfolding on Ludlow St. in a former food storage warehouse. The curtain will soon rise there on a new cinema called Metrograph on March 4. For cineastes on the Lower East Side, it’s a celluloid CINEMA continued on p. 22

Snap — seen on a leash on a tree branch — comes to Tompkins Square Park all the time with her human companions, Nick and Danielle. She’s apparently not a scaredy-cat when it comes to red-tail hawks.

New Extell building is wrecking the hood, in many ways: Locals BY YANNIC RACK

ower East Siders gathered near the Manhattan Bridge on South St. once again this week to protest against the 80-story apartment tower — dubbed the “Building from Hell” — that is currently rising there, and whose construction they say is damaging neighboring buildings. “This is not about gentrification, this is about extermination,” said Maggie Martinez, who lives near-

by at 55 Rutgers Slip. “We need to make sure that the structures of these buildings have not been compromised.” Foundation work at 250 South St., where Extell Development Company is erecting an enormous residential glass tower called One Manhattan Square, has nearby residents worried that it is slowly destroying their own dwellings. “People’s apartments are sloping and walls are cracking,” Martinez said.

“That is not a safe environment for anyone.” Residents at 82 Rutgers Slip next door first complained about vibrations in their building caused by the new project’s foundation work more than a year ago, which prompted the developer to install seismic monitors within the building, as well as around the construction site’s perimeter. The project currently has a partial stop-work order in place, as well as two open EXTELL continued on p. 4