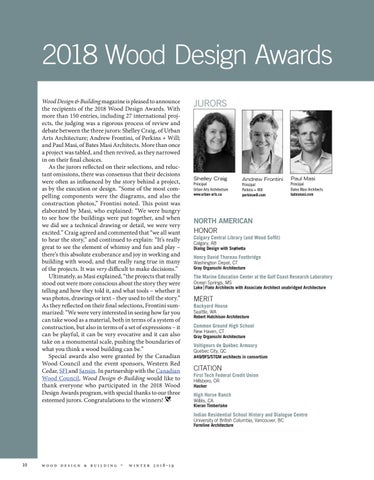 2018 Wood Design Awards Wood Design & Building magazine is pleased to announce the recipients of the 2018 Wood Design Awards. With more than 150 entries, including 27 international projects, the judging was a rigorous process of review and debate between the three jurors: Shelley Craig, of Urban Arts Architecture; Andrew Frontini, of Perkins + Will; and Paul Masi, of Bates Masi Architects. More than once a project was tabled, and then revived, as they narrowed in on their final choices. As the jurors reflected on their selections, and reluctant omissions, there was consensus that their decisions were often as influenced by the story behind a project, as by the execution or design. “Some of the most compelling components were the diagrams, and also the construction photos,” Frontini noted. This point was elaborated by Masi, who explained: “We were hungry to see how the buildings were put together, and when we did see a technical drawing or detail, we were very excited.” Craig agreed and commented that “we all want to hear the story,” and continued to explain: “It’s really great to see the element of whimsy and fun and play – there’s this absolute exuberance and joy in working and building with wood, and that really rang true in many of the projects. It was very difficult to make decisions.” Ultimately, as Masi explained, “the projects that really stood out were more conscious about the story they were telling and how they told it, and what tools – whether it was photos, drawings or text – they used to tell the story.” As they reflected on their final selections, Frontini summarized: “We were very interested in seeing how far you can take wood as a material, both in terms of a system of construction, but also in terms of a set of expressions – it can be playful, it can be very evocative and it can also take on a monumental scale, pushing the boundaries of what you think a wood building can be.” Special awards also were granted by the Canadian Wood Council and the event sponsors, Western Red Cedar, SFI and Sansin. In partnership with the Canadian Wood Council, Wood Design & Building would like to thank everyone who participated in the 2018 Wood Design Awards program, with special thanks to our three esteemed jurors. Congratulations to the winners! 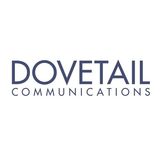