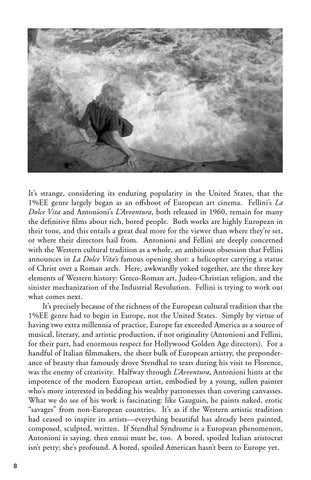 It’s strange, considering its enduring popularity in the United States, that the 1%EE genre largely began as an offshoot of European art cinema. Fellini’s La Dolce Vita and Antonioni’s L’Avventura, both released in 1960, remain for many the definitive films about rich, bored people. Both works are highly European in their tone, and this entails a great deal more for the viewer than where they’re set, or where their directors hail from. Antonioni and Fellini are deeply concerned with the Western cultural tradition as a whole, an ambitious obsession that Fellini announces in La Dolce Vita’s famous opening shot: a helicopter carrying a statue of Christ over a Roman arch. Here, awkwardly yoked together, are the three key elements of Western history: Greco-Roman art, Judeo-Christian religion, and the sinister mechanization of the Industrial Revolution. Fellini is trying to work out what comes next. It’s precisely because of the richness of the European cultural tradition that the 1%EE genre had to begin in Europe, not the United States. Simply by virtue of having two extra millennia of practice, Europe far exceeded America as a source of musical, literary, and artistic production, if not originality (Antonioni and Fellini, for their part, had enormous respect for Hollywood Golden Age directors). For a handful of Italian filmmakers, the sheer bulk of European artistry, the preponderance of beauty that famously drove Stendhal to tears during his visit to Florence, was the enemy of creativity. Halfway through L’Avventura, Antonioni hints at the impotence of the modern European artist, embodied by a young, sullen painter who’s more interested in bedding his wealthy patronesses than covering canvasses. What we do see of his work is fascinating: like Gauguin, he paints naked, erotic “savages” from non-European countries. It’s as if the Western artistic tradition had ceased to inspire its artists—everything beautiful has already been painted, composed, sculpted, written. If Stendhal Syndrome is a European phenomenon, Antonioni is saying, then ennui must be, too. A bored, spoiled Italian aristocrat isn’t petty; she’s profound. A bored, spoiled American hasn’t been to Europe yet. 8