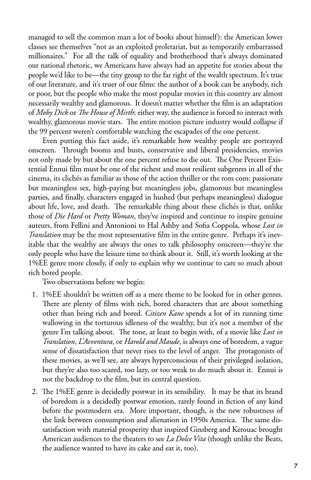 managed to sell the common man a lot of books about himself ): the American lower classes see themselves “not as an exploited proletariat, but as temporarily embarrassed millionaires.” For all the talk of equality and brotherhood that’s always dominated our national rhetoric, we Americans have always had an appetite for stories about the people we’d like to be—the tiny group to the far right of the wealth spectrum. It’s true of our literature, and it’s truer of our films: the author of a book can be anybody, rich or poor, but the people who make the most popular movies in this country are almost necessarily wealthy and glamorous. It doesn’t matter whether the film is an adaptation of Moby Dick or The House of Mirth; either way, the audience is forced to interact with wealthy, glamorous movie stars. The entire motion picture industry would collapse if the 99 percent weren’t comfortable watching the escapades of the one percent. Even putting this fact aside, it’s remarkable how wealthy people are portrayed onscreen. Through booms and busts, conservative and liberal presidencies, movies not only made by but about the one percent refuse to die out. The One Percent Existential Ennui film must be one of the richest and most resilient subgenres in all of the cinema, its clichés as familiar as those of the action thriller or the rom com: passionate but meaningless sex, high-paying but meaningless jobs, glamorous but meaningless parties, and finally, characters engaged in hushed (but perhaps meaningless) dialogue about life, love, and death. The remarkable thing about these clichés is that, unlike those of Die Hard or Pretty Woman, they’ve inspired and continue to inspire genuine auteurs, from Fellini and Antonioni to Hal Ashby and Sofia Coppola, whose Lost in Translation may be the most representative film in the entire genre. Perhaps it’s inevitable that the wealthy are always the ones to talk philosophy onscreen—they’re the only people who have the leisure time to think about it. Still, it’s worth looking at the 1%EE genre more closely, if only to explain why we continue to care so much about rich bored people. Two observations before we begin: 1. 1%EE shouldn’t be written off as a mere theme to be looked for in other genres. There are plenty of films with rich, bored characters that are about something other than being rich and bored. Citizen Kane spends a lot of its running time wallowing in the torturous idleness of the wealthy, but it’s not a member of the genre I’m talking about. The tone, at least to begin with, of a movie like Lost in Translation, L’Avventura, or Harold and Maude, is always one of boredom, a vague sense of dissatisfaction that never rises to the level of anger. The protagonists of these movies, as we’ll see, are always hyperconscious of their privileged isolation, but they’re also too scared, too lazy, or too weak to do much about it. Ennui is not the backdrop to the film, but its central question. 2. The 1%EE genre is decidedly postwar in its sensibility. It may be that its brand of boredom is a decidedly postwar emotion, rarely found in fiction of any kind before the postmodern era. More important, though, is the new robustness of the link between consumption and alienation in 1950s America. The same dissatisfaction with material prosperity that inspired Ginsberg and Kerouac brought American audiences to the theaters to see La Dolce Vita (though unlike the Beats, the audience wanted to have its cake and eat it, too). 7