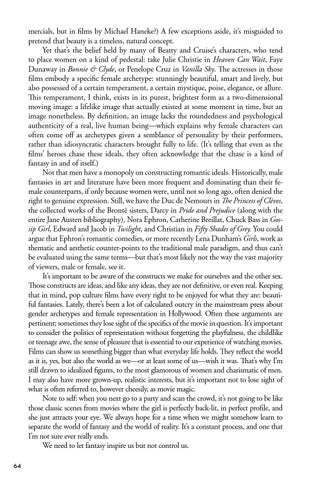 mercials, but in films by Michael Haneke?) A few exceptions aside, it’s misguided to pretend that beauty is a timeless, natural concept. Yet that’s the belief held by many of Beatty and Cruise’s characters, who tend to place women on a kind of pedestal: take Julie Christie in Heaven Can Wait, Faye Dunaway in Bonnie & Clyde, or Penelope Cruz in Vanilla Sky. The actresses in those films embody a specific female archetype: stunningly beautiful, smart and lively, but also possessed of a certain temperament, a certain mystique, poise, elegance, or allure. This temperament, I think, exists in its purest, brightest form as a two-dimensional moving image: a lifelike image that actually existed at some moment in time, but an image nonetheless. By definition, an image lacks the roundedness and psychological authenticity of a real, live human being—which explains why female characters can often come off as archetypes given a semblance of personality by their performers, rather than idiosyncratic characters brought fully to life. (It’s telling that even as the films’ heroes chase these ideals, they often acknowledge that the chase is a kind of fantasy in and of itself.) Not that men have a monopoly on constructing romantic ideals. Historically, male fantasies in art and literature have been more frequent and dominating than their female counterparts, if only because women were, until not so long ago, often denied the right to genuine expression. Still, we have the Duc de Nemours in The Princess of Clèves, the collected works of the Brontë sisters, Darcy in Pride and Prejudice (along with the entire Jane Austen bibliography), Nora Ephron, Catherine Breillat, Chuck Bass in Gossip Girl, Edward and Jacob in Twilight, and Christian in Fifty Shades of Grey. You could argue that Ephron’s romantic comedies, or more recently Lena Dunham’s Girls, work as thematic and aesthetic counter-points to the traditional male paradigm, and thus can’t be evaluated using the same terms—but that’s most likely not the way the vast majority of viewers, male or female, see it. It’s important to be aware of the constructs we make for ourselves and the other sex. Those constructs are ideas, and like any ideas, they are not definitive, or even real. Keeping that in mind, pop culture films have every right to be enjoyed for what they are: beautiful fantasies. Lately, there’s been a lot of calculated outcry in the mainstream press about gender archetypes and female representation in Hollywood. Often these arguments are pertinent; sometimes they lose sight of the specifics of the movie in question. It’s important to consider the politics of representation without forgetting the playfulness, the childlike or teenage awe, the sense of pleasure that is essential to our experience of watching movies. Films can show us something bigger than what everyday life holds. They reflect the world as it is, yes, but also the world as we—or at least some of us—wish it was. That’s why I’m still drawn to idealized figures, to the most glamorous of women and charismatic of men. I may also have more grown-up, realistic interests, but it’s important not to lose sight of what is often referred to, however cheesily, as movie magic. Note to self: when you next go to a party and scan the crowd, it’s not going to be like those classic scenes from movies where the girl is perfectly back-lit, in perfect profile, and she just attracts your eye. We always hope for a time when we might somehow learn to separate the world of fantasy and the world of reality. It’s a constant process, and one that I’m not sure ever really ends. We need to let fantasy inspire us but not control us. 64