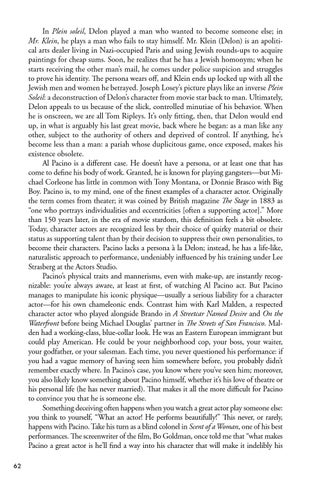 In Plein soleil, Delon played a man who wanted to become someone else; in Mr. Klein, he plays a man who fails to stay himself. Mr. Klein (Delon) is an apolitical arts dealer living in Nazi-occupied Paris and using Jewish rounds-ups to acquire paintings for cheap sums. Soon, he realizes that he has a Jewish homonym; when he starts receiving the other man’s mail, he comes under police suspicion and struggles to prove his identity. The persona wears off, and Klein ends up locked up with all the Jewish men and women he betrayed. Joseph Losey’s picture plays like an inverse Plein Soleil: a deconstruction of Delon’s character from movie star back to man. Ultimately, Delon appeals to us because of the slick, controlled minutiae of his behavior. When he is onscreen, we are all Tom Ripleys. It’s only fitting, then, that Delon would end up, in what is arguably his last great movie, back where he began: as a man like any other, subject to the authority of others and deprived of control. If anything, he’s become less than a man: a pariah whose duplicitous game, once exposed, makes his existence obsolete. Al Pacino is a different case. He doesn’t have a persona, or at least one that has come to define his body of work. Granted, he is known for playing gangsters—but Michael Corleone has little in common with Tony Montana, or Donnie Brasco with Big Boy. Pacino is, to my mind, one of the finest examples of a character actor. Originally the term comes from theater; it was coined by British magazine The Stage in 1883 as “one who portrays individualities and eccentricities [often a supporting actor].” More than 150 years later, in the era of movie stardom, this definition feels a bit obsolete. Today, character actors are recognized less by their choice of quirky material or their status as supporting talent than by their decision to suppress their own personalities, to become their characters. Pacino lacks a persona à la Delon; instead, he has a life-like, naturalistic approach to performance, undeniably influenced by his training under Lee Strasberg at the Actors Studio. Pacino’s physical traits and mannerisms, even with make-up, are instantly recognizable: you’re always aware, at least at first, of watching Al Pacino act. But Pacino manages to manipulate his iconic physique—usually a serious liability for a character actor—for his own chameleonic ends. Contrast him with Karl Malden, a respected character actor who played alongside Brando in A Streetcar Named Desire and On the Waterfront before being Michael Douglas’ partner in The Streets of San Francisco. Malden had a working-class, blue-collar look. He was an Eastern European immigrant but could play American. He could be your neighborhood cop, your boss, your waiter, your godfather, or your salesman. Each time, you never questioned his performance: if you had a vague memory of having seen him somewhere before, you probably didn’t remember exactly where. In Pacino’s case, you know where you’ve seen him; moreover, you also likely know something about Pacino himself, whether it’s his love of theatre or his personal life (he has never married). That makes it all the more difficult for Pacino to convince you that he is someone else. Something deceiving often happens when you watch a great actor play someone else: you think to yourself, “What an actor! He performs beautifully!” This never, or rarely, happens with Pacino. Take his turn as a blind colonel in Scent of a Woman, one of his best performances. The screenwriter of the film, Bo Goldman, once told me that “what makes Pacino a great actor is he’ll find a way into his character that will make it indelibly his 62