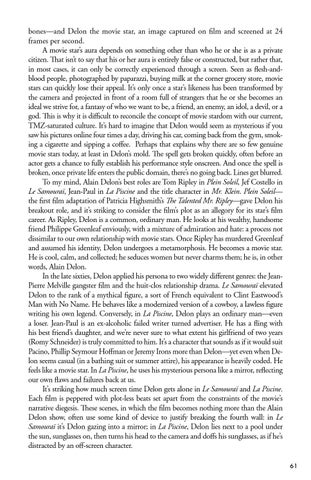 bones—and Delon the movie star, an image captured on film and screened at 24 frames per second. A movie star’s aura depends on something other than who he or she is as a private citizen. That isn’t to say that his or her aura is entirely false or constructed, but rather that, in most cases, it can only be correctly experienced through a screen. Seen as flesh-andblood people, photographed by paparazzi, buying milk at the corner grocery store, movie stars can quickly lose their appeal. It’s only once a star’s likeness has been transformed by the camera and projected in front of a room full of strangers that he or she becomes an ideal we strive for, a fantasy of who we want to be, a friend, an enemy, an idol, a devil, or a god. This is why it is difficult to reconcile the concept of movie stardom with our current, TMZ-saturated culture. It’s hard to imagine that Delon would seem as mysterious if you saw his pictures online four times a day, driving his car, coming back from the gym, smoking a cigarette and sipping a coffee. Perhaps that explains why there are so few genuine movie stars today, at least in Delon’s mold. The spell gets broken quickly, often before an actor gets a chance to fully establish his performance style onscreen. And once the spell is broken, once private life enters the public domain, there’s no going back. Lines get blurred. To my mind, Alain Delon’s best roles are Tom Ripley in Plein Soleil, Jef Costello in Le Samouraï, Jean-Paul in La Piscine and the title character in Mr. Klein. Plein Soleil— the first film adaptation of Patricia Highsmith’s The Talented Mr. Ripley—gave Delon his breakout role, and it’s striking to consider the film’s plot as an allegory for its star’s film career. As Ripley, Delon is a common, ordinary man. He looks at his wealthy, handsome friend Philippe Greenleaf enviously, with a mixture of admiration and hate: a process not dissimilar to our own relationship with movie stars. Once Ripley has murdered Greenleaf and assumed his identity, Delon undergoes a metamorphosis. He becomes a movie star. He is cool, calm, and collected; he seduces women but never charms them; he is, in other words, Alain Delon. In the late sixties, Delon applied his persona to two widely different genres: the JeanPierre Melville gangster film and the huit-clos relationship drama. Le Samouraï elevated Delon to the rank of a mythical figure, a sort of French equivalent to Clint Eastwood’s Man with No Name. He behaves like a modernized version of a cowboy, a lawless figure writing his own legend. Conversely, in La Piscine, Delon plays an ordinary man—even a loser. Jean-Paul is an ex-alcoholic failed writer turned advertiser. He has a fling with his best friend’s daughter, and we’re never sure to what extent his girlfriend of two years (Romy Schneider) is truly committed to him. It’s a character that sounds as if it would suit Pacino, Phillip Seymour Hoffman or Jeremy Irons more than Delon—yet even when Delon seems casual (in a bathing suit or summer attire), his appearance is heavily coded. He feels like a movie star. In La Piscine, he uses his mysterious persona like a mirror, reflecting our own flaws and failures back at us. It’s striking how much screen time Delon gets alone in Le Samouraï and La Piscine. Each film is peppered with plot-less beats set apart from the constraints of the movie’s narrative diegesis. These scenes, in which the film becomes nothing more than the Alain Delon show, often use some kind of device to justify breaking the fourth wall: in Le Samouraï it’s Delon gazing into a mirror; in La Piscine, Delon lies next to a pool under the sun, sunglasses on, then turns his head to the camera and doffs his sunglasses, as if he’s distracted by an off-screen character. 61