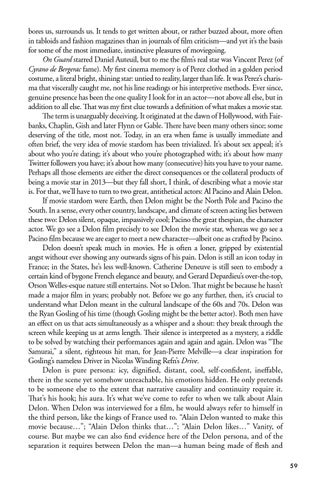 bores us, surrounds us. It tends to get written about, or rather buzzed about, more often in tabloids and fashion magazines than in journals of film criticism—and yet it’s the basis for some of the most immediate, instinctive pleasures of moviegoing. On Guard starred Daniel Auteuil, but to me the film’s real star was Vincent Perez (of Cyrano de Bergerac fame). My first cinema memory is of Perez clothed in a golden period costume, a literal bright, shining star: untied to reality, larger than life. It was Perez’s charisma that viscerally caught me, not his line readings or his interpretive methods. Ever since, genuine presence has been the one quality I look for in an actor—not above all else, but in addition to all else. That was my first clue towards a definition of what makes a movie star. The term is unarguably deceiving. It originated at the dawn of Hollywood, with Fairbanks, Chaplin, Gish and later Flynn or Gable. There have been many others since; some deserving of the title, most not. Today, in an era when fame is usually immediate and often brief, the very idea of movie stardom has been trivialized. It’s about sex appeal; it’s about who you’re dating; it’s about who you’re photographed with; it’s about how many Twitter followers you have; it’s about how many (consecutive) hits you have to your name. Perhaps all those elements are either the direct consequences or the collateral products of being a movie star in 2013—but they fall short, I think, of describing what a movie star is. For that, we’ll have to turn to two great, antithetical actors: Al Pacino and Alain Delon. If movie stardom were Earth, then Delon might be the North Pole and Pacino the South. In a sense, every other country, landscape, and climate of screen acting lies between these two: Delon silent, opaque, impassively cool; Pacino the great thespian, the character actor. We go see a Delon film precisely to see Delon the movie star, whereas we go see a Pacino film because we are eager to meet a new character—albeit one as crafted by Pacino. Delon doesn’t speak much in movies. He is often a loner, gripped by existential angst without ever showing any outwards signs of his pain. Delon is still an icon today in France; in the States, he’s less well-known. Catherine Deneuve is still seen to embody a certain kind of bygone French elegance and beauty, and Gerard Depardieu’s over-the-top, Orson Welles-esque nature still entertains. Not so Delon. That might be because he hasn’t made a major film in years; probably not. Before we go any further, then, it’s crucial to understand what Delon meant in the cultural landscape of the 60s and 70s. Delon was the Ryan Gosling of his time (though Gosling might be the better actor). Both men have an effect on us that acts simultaneously as a whisper and a shout: they break through the screen while keeping us at arms length. Their silence is interpreted as a mystery, a riddle to be solved by watching their performances again and again and again. Delon was “The Samurai,” a silent, righteous hit man, for Jean-Pierre Melville—a clear inspiration for Gosling’s nameless Driver in Nicolas Winding Refn’s Drive. Delon is pure persona: icy, dignified, distant, cool, self-confident, ineffable, there in the scene yet somehow unreachable, his emotions hidden. He only pretends to be someone else to the extent that narrative causality and continuity require it. That’s his hook; his aura. It’s what we’ve come to refer to when we talk about Alain Delon. When Delon was interviewed for a film, he would always refer to himself in the third person, like the kings of France used to. “Alain Delon wanted to make this movie because…”; “Alain Delon thinks that…”; “Alain Delon likes…” Vanity, of course. But maybe we can also find evidence here of the Delon persona, and of the separation it requires between Delon the man—a human being made of flesh and 59