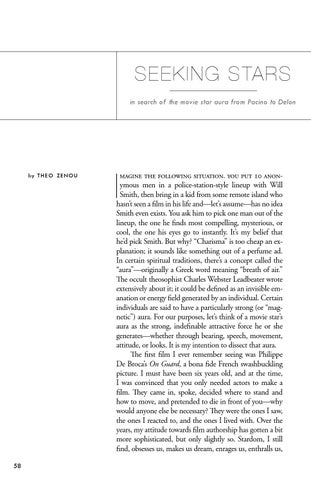 magine the following situation. you put 10 anonymous men in a police-station-style lineup with Will Smith, then bring in a kid from some remote island who hasn’t seen a film in his life and—let’s assume—has no idea Smith even exists. You ask him to pick one man out of the lineup, the one he finds most compelling, mysterious, or cool, the one his eyes go to instantly. It’s my belief that he’d pick Smith. But why? “Charisma” is too cheap an explanation; it sounds like something out of a perfume ad. In certain spiritual traditions, there’s a concept called the “aura”—originally a Greek word meaning “breath of air.” The occult theosophist Charles Webster Leadbeater wrote extensively about it; it could be defined as an invisible emanation or energy field generated by an individual. Certain individuals are said to have a particularly strong (or “magnetic”) aura. For our purposes, let’s think of a movie star’s aura as the strong, indefinable attractive force he or she generates—whether through bearing, speech, movement, attitude, or looks. It is my intention to dissect that aura. The first film I ever remember seeing was Philippe De Broca’s On Guard, a bona fide French swashbuckling picture. I must have been six years old, and at the time, I was convinced that you only needed actors to make a film. They came in, spoke, decided where to stand and how to move, and pretended to die in front of you—why would anyone else be necessary? They were the ones I saw, the ones I reacted to, and the ones I lived with. Over the years, my attitude towards film authorship has gotten a bit more sophisticated, but only slightly so. Stardom, I still find, obsesses us, makes us dream, enrages us, enthralls us,