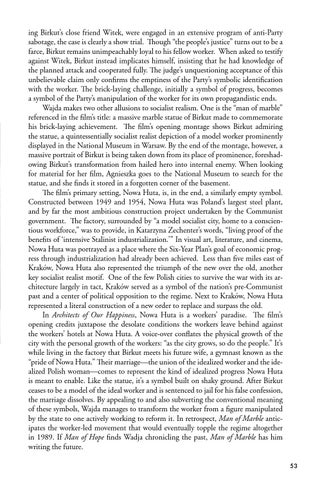 ing Birkut’s close friend Witek, were engaged in an extensive program of anti-Party sabotage, the case is clearly a show trial. Though “the people’s justice” turns out to be a farce, Birkut remains unimpeachably loyal to his fellow worker. When asked to testify against Witek, Birkut instead implicates himself, insisting that he had knowledge of the planned attack and cooperated fully. The judge’s unquestioning acceptance of this unbelievable claim only confirms the emptiness of the Party’s symbolic identification with the worker. The brick-laying challenge, initially a symbol of progress, becomes a symbol of the Party’s manipulation of the worker for its own propagandistic ends. Wajda makes two other allusions to socialist realism. One is the “man of marble” referenced in the film’s title: a massive marble statue of Birkut made to commemorate his brick-laying achievement. The film’s opening montage shows Birkut admiring the statue, a quintessentially socialist realist depiction of a model worker prominently displayed in the National Museum in Warsaw. By the end of the montage, however, a massive portrait of Birkut is being taken down from its place of prominence, foreshadowing Birkut’s transformation from hailed hero into internal enemy. When looking for material for her film, Agnieszka goes to the National Museum to search for the statue, and she finds it stored in a forgotten corner of the basement. The film’s primary setting, Nowa Huta, is, in the end, a similarly empty symbol. Constructed between 1949 and 1954, Nowa Huta was Poland’s largest steel plant, and by far the most ambitious construction project undertaken by the Communist government. The factory, surrounded by “a model socialist city, home to a conscientious workforce,” was to provide, in Katarzyna Zechenter’s words, “living proof of the benefits of ‘intensive Stalinist industrialization.’” In visual art, literature, and cinema, Nowa Huta was portrayed as a place where the Six-Year Plan’s goal of economic progress through industrialization had already been achieved. Less than five miles east of Kraków, Nowa Huta also represented the triumph of the new over the old, another key socialist realist motif. One of the few Polish cities to survive the war with its architecture largely in tact, Kraków served as a symbol of the nation’s pre-Communist past and a center of political opposition to the regime. Next to Kraków, Nowa Huta represented a literal construction of a new order to replace and surpass the old. In Architects of Our Happiness, Nowa Huta is a workers’ paradise. The film’s opening credits juxtapose the desolate conditions the workers leave behind against the workers’ hotels at Nowa Huta. A voice-over conflates the physical growth of the city with the personal growth of the workers: “as the city grows, so do the people.” It’s while living in the factory that Birkut meets his future wife, a gymnast known as the “pride of Nowa Huta.” Their marriage—the union of the idealized worker and the idealized Polish woman—comes to represent the kind of idealized progress Nowa Huta is meant to enable. Like the statue, it’s a symbol built on shaky ground. After Birkut ceases to be a model of the ideal worker and is sentenced to jail for his false confession, the marriage dissolves. By appealing to and also subverting the conventional meaning of these symbols, Wajda manages to transform the worker from a figure manipulated by the state to one actively working to reform it. In retrospect, Man of Marble anticipates the worker-led movement that would eventually topple the regime altogether in 1989. If Man of Hope finds Wadja chronicling the past, Man of Marble has him writing the future. 53