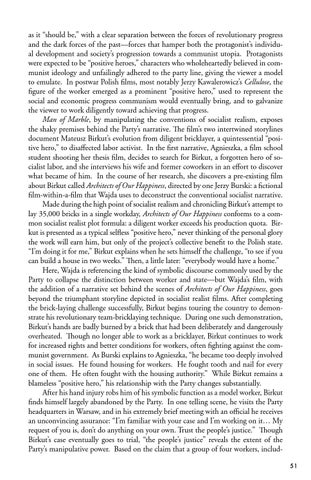 as it “should be,” with a clear separation between the forces of revolutionary progress and the dark forces of the past—forces that hamper both the protagonist’s individual development and society’s progression towards a communist utopia. Protagonists were expected to be “positive heroes,” characters who wholeheartedly believed in communist ideology and unfailingly adhered to the party line, giving the viewer a model to emulate. In postwar Polish films, most notably Jerzy Kawalerowicz’s Cellulose, the figure of the worker emerged as a prominent “positive hero,” used to represent the social and economic progress communism would eventually bring, and to galvanize the viewer to work diligently toward achieving that progress. Man of Marble, by manipulating the conventions of socialist realism, exposes the shaky premises behind the Party’s narrative. The film’s two intertwined storylines document Mateusz Birkut’s evolution from diligent bricklayer, a quintessential “positive hero,” to disaffected labor activist. In the first narrative, Agnieszka, a film school student shooting her thesis film, decides to search for Birkut, a forgotten hero of socialist labor, and she interviews his wife and former coworkers in an effort to discover what became of him. In the course of her research, she discovers a pre-existing film about Birkut called Architects of Our Happiness, directed by one Jerzy Burski: a fictional film-within-a-film that Wajda uses to deconstruct the conventional socialist narrative. Made during the high point of socialist realism and chronicling Birkut’s attempt to lay 35,000 bricks in a single workday, Architects of Our Happiness conforms to a common socialist realist plot formula: a diligent worker exceeds his production quota. Birkut is presented as a typical selfless “positive hero,” never thinking of the personal glory the work will earn him, but only of the project’s collective benefit to the Polish state. “I’m doing it for me,” Birkut explains when he sets himself the challenge, “to see if you can build a house in two weeks.” Then, a little later: “everybody would have a home.” Here, Wajda is referencing the kind of symbolic discourse commonly used by the Party to collapse the distinction between worker and state—but Wajda’s film, with the addition of a narrative set behind the scenes of Architects of Our Happiness, goes beyond the triumphant storyline depicted in socialist realist films. After completing the brick-laying challenge successfully, Birkut begins touring the country to demonstrate his revolutionary team-bricklaying technique. During one such demonstration, Birkut’s hands are badly burned by a brick that had been deliberately and dangerously overheated. Though no longer able to work as a bricklayer, Birkut continues to work for increased rights and better conditions for workers, often fighting against the communist government. As Burski explains to Agnieszka, “he became too deeply involved in social issues. He found housing for workers. He fought tooth and nail for every one of them. He often fought with the housing authority.” While Birkut remains a blameless “positive hero,” his relationship with the Party changes substantially. After his hand injury robs him of his symbolic function as a model worker, Birkut finds himself largely abandoned by the Party. In one telling scene, he visits the Party headquarters in Warsaw, and in his extremely brief meeting with an official he receives an unconvincing assurance: “I’m familiar with your case and I’m working on it… My request of you is, don’t do anything on your own. Trust the people’s justice.” Though Birkut’s case eventually goes to trial, “the people’s justice” reveals the extent of the Party’s manipulative power. Based on the claim that a group of four workers, includ51