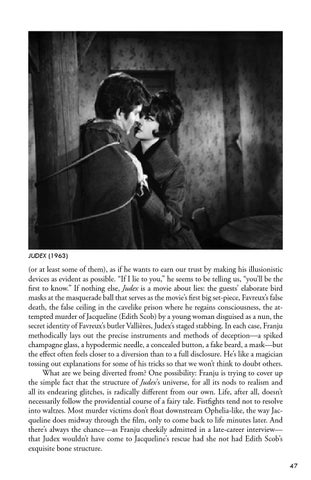 (or at least some of them), as if he wants to earn our trust by making his illusionistic devices as evident as possible. “If I lie to you,” he seems to be telling us, “you’ll be the first to know.” If nothing else, Judex is a movie about lies: the guests’ elaborate bird masks at the masquerade ball that serves as the movie’s first big set-piece, Favreux’s false death, the false ceiling in the cavelike prison where he regains consciousness, the attempted murder of Jacqueline (Edith Scob) by a young woman disguised as a nun, the secret identity of Favreux’s butler Vallières, Judex’s staged stabbing. In each case, Franju methodically lays out the precise instruments and methods of deception—a spiked champagne glass, a hypodermic needle, a concealed button, a fake beard, a mask—but the effect often feels closer to a diversion than to a full disclosure. He’s like a magician tossing out explanations for some of his tricks so that we won’t think to doubt others. What are we being diverted from? One possibility: Franju is trying to cover up the simple fact that the structure of Judex’s universe, for all its nods to realism and all its endearing glitches, is radically different from our own. Life, after all, doesn’t necessarily follow the providential course of a fairy tale. Fistfights tend not to resolve into waltzes. Most murder victims don’t float downstream Ophelia-like, the way Jacqueline does midway through the film, only to come back to life minutes later. And there’s always the chance—as Franju cheekily admitted in a late-career interview— that Judex wouldn’t have come to Jacqueline’s rescue had she not had Edith Scob’s exquisite bone structure. 47