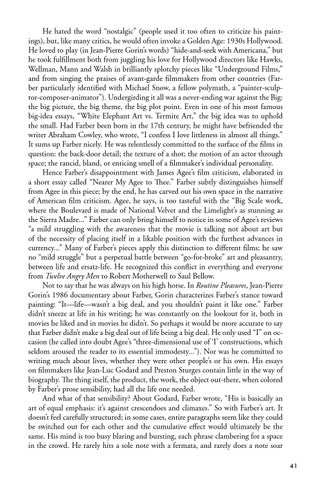 He hated the word “nostalgic” (people used it too often to criticize his paintings), but, like many critics, he would often invoke a Golden Age: 1930s Hollywood. He loved to play (in Jean-Pierre Gorin’s words) “hide-and-seek with Americana,” but he took fulfillment both from juggling his love for Hollywood directors like Hawks, Wellman, Mann and Walsh in brilliantly splotchy pieces like “Underground Films,” and from singing the praises of avant-garde filmmakers from other countries (Farber particularly identified with Michael Snow, a fellow polymath, a “painter-sculptor-composer-animator”). Undergirding it all was a never-ending war against the Big: the big picture, the big theme, the big plot point. Even in one of his most famous big-idea essays, “White Elephant Art vs. Termite Art,” the big idea was to uphold the small. Had Farber been born in the 17th century, he might have befriended the writer Abraham Cowley, who wrote, “I confess I love littleness in almost all things.” It sums up Farber nicely. He was relentlessly committed to the surface of the films in question: the back-door detail; the texture of a shot; the motion of an actor through space; the rancid, bland, or enticing smell of a filmmaker’s individual personality. Hence Farber’s disappointment with James Agee’s film criticism, elaborated in a short essay called “Nearer My Agee to Thee.” Farber subtly distinguishes himself from Agee in this piece; by the end, he has carved out his own space in the narrative of American film criticism. Agee, he says, is too tasteful with the “Big Scale work, where the Boulevard is made of National Velvet and the Limelight’s as stunning as the Sierra Madre...” Farber can only bring himself to notice in some of Agee’s reviews “a mild struggling with the awareness that the movie is talking not about art but of the necessity of placing itself in a likable position with the furthest advances in currency...” Many of Farber’s pieces apply this distinction to different films; he saw no “mild struggle” but a perpetual battle between “go-for-broke” art and pleasantry, between life and ersatz-life. He recognized this conflict in everything and everyone from Twelve Angry Men to Robert Motherwell to Saul Bellow. Not to say that he was always on his high horse. In Routine Pleasures, Jean-Pierre Gorin’s 1986 documentary about Farber, Gorin characterizes Farber’s stance toward painting: “It—life—wasn’t a big deal, and you shouldn’t paint it like one.” Farber didn’t sneeze at life in his writing; he was constantly on the lookout for it, both in movies he liked and in movies he didn’t. So perhaps it would be more accurate to say that Farber didn’t make a big deal out of life being a big deal. He only used “I” on occasion (he called into doubt Agee’s “three-dimensional use of ‘I’ constructions, which seldom aroused the reader to its essential immodesty...”). Nor was he committed to writing much about lives, whether they were other people’s or his own. His essays on filmmakers like Jean-Luc Godard and Preston Sturges contain little in the way of biography. The thing itself, the product, the work, the object out-there, when colored by Farber’s prose sensibility, had all the life one needed. And what of that sensibility? About Godard, Farber wrote, “His is basically an art of equal emphasis: it’s against crescendoes and climaxes.” So with Farber’s art. It doesn’t feel carefully structured; in some cases, entire paragraphs seem like they could be switched out for each other and the cumulative effect would ultimately be the same. His mind is too busy blaring and bursting, each phrase clambering for a space in the crowd. He rarely hits a sole note with a fermata, and rarely does a note soar 41