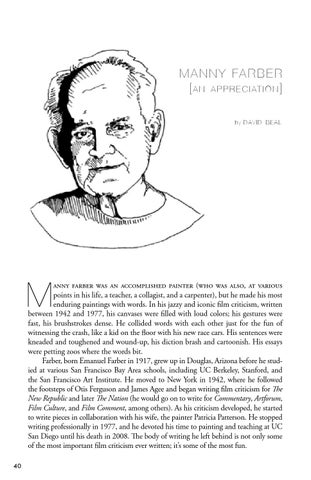 anny farber was an accomplished painter (who was also, at various points in his life, a teacher, a collagist, and a carpenter), but he made his most enduring paintings with words. In his jazzy and iconic film criticism, written between 1942 and 1977, his canvases were filled with loud colors; his gestures were fast, his brushstrokes dense. He collided words with each other just for the fun of witnessing the crash, like a kid on the floor with his new race cars. His sentences were kneaded and toughened and wound-up, his diction brash and cartoonish. His essays were petting zoos where the words bit. Farber, born Emanuel Farber in 1917, grew up in Douglas, Arizona before he studied at various San Francisco Bay Area schools, including UC Berkeley, Stanford, and the San Francisco Art Institute. He moved to New York in 1942, where he followed the footsteps of Otis Ferguson and James Agee and began writing film criticism for The New Republic and later The Nation (he would go on to write for Commentary, Artforum, Film Culture, and Film Comment, among others). As his criticism developed, he started to write pieces in collaboration with his wife, the painter Patricia Patterson. He stopped writing professionally in 1977, and he devoted his time to painting and teaching at UC San Diego until his death in 2008. The body of writing he left behind is not only some of the most important film criticism ever written; itâ&#x20AC;&#x2122;s some of the most fun.