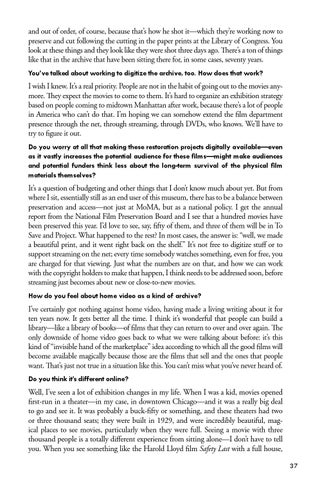 and out of order, of course, because that’s how he shot it—which they’re working now to preserve and cut following the cutting in the paper prints at the Library of Congress. You look at these things and they look like they were shot three days ago. There’s a ton of things like that in the archive that have been sitting there for, in some cases, seventy years. You’ve talked about working to digitize the archive, too. How does that work?

I wish I knew. It’s a real priority. People are not in the habit of going out to the movies anymore. They expect the movies to come to them. It’s hard to organize an exhibition strategy based on people coming to midtown Manhattan after work, because there’s a lot of people in America who can’t do that. I’m hoping we can somehow extend the film department presence through the net, through streaming, through DVDs, who knows. We’ll have to try to figure it out. Do you worry at all that making these restoration projects digitally available—even as it vastly increases the potential audience for these films—might make audiences and potential funders think less about the long-term survival of the physical film materials themselves?

It’s a question of budgeting and other things that I don’t know much about yet. But from where I sit, essentially still as an end user of this museum, there has to be a balance between preservation and access—not just at MoMA, but as a national policy. I get the annual report from the National Film Preservation Board and I see that a hundred movies have been preserved this year. I’d love to see, say, fifty of them, and three of them will be in To Save and Project. What happened to the rest? In most cases, the answer is: “well, we made a beautiful print, and it went right back on the shelf.” It’s not free to digitize stuff or to support streaming on the net; every time somebody watches something, even for free, you are charged for that viewing. Just what the numbers are on that, and how we can work with the copyright holders to make that happen, I think needs to be addressed soon, before streaming just becomes about new or close-to-new movies. How do you feel about home video as a kind of archive?

I’ve certainly got nothing against home video, having made a living writing about it for ten years now. It gets better all the time. I think it’s wonderful that people can build a library—like a library of books—of films that they can return to over and over again. The only downside of home video goes back to what we were talking about before: it’s this kind of “invisible hand of the marketplace” idea according to which all the good films will become available magically because those are the films that sell and the ones that people want. That’s just not true in a situation like this. You can’t miss what you’ve never heard of. Do you think it’s different online?

Well, I’ve seen a lot of exhibition changes in my life. When I was a kid, movies opened first-run in a theater—in my case, in downtown Chicago—and it was a really big deal to go and see it. It was probably a buck-fifty or something, and these theaters had two or three thousand seats; they were built in 1929, and were incredibly beautiful, magical places to see movies, particularly when they were full. Seeing a movie with three thousand people is a totally different experience from sitting alone—I don’t have to tell you. When you see something like the Harold Lloyd film Safety Last with a full house, 37