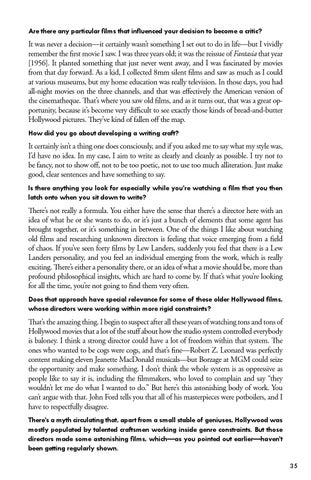 Are there any particular films that influenced your decision to become a critic?

It was never a decision—it certainly wasn’t something I set out to do in life—but I vividly remember the first movie I saw. I was three years old; it was the reissue of Fantasia that year [1956]. It planted something that just never went away, and I was fascinated by movies from that day forward. As a kid, I collected 8mm silent films and saw as much as I could at various museums, but my home education was really television. In those days, you had all-night movies on the three channels, and that was effectively the American version of the cinematheque. That’s where you saw old films, and as it turns out, that was a great opportunity, because it’s become very difficult to see exactly those kinds of bread-and-butter Hollywood pictures. They’ve kind of fallen off the map. How did you go about developing a writing craft?

It certainly isn’t a thing one does consciously, and if you asked me to say what my style was, I’d have no idea. In my case, I aim to write as clearly and cleanly as possible. I try not to be fancy, not to show off, not to be too poetic, not to use too much alliteration. Just make good, clear sentences and have something to say. Is there anything you look for especially while you’re watching a film that you then latch onto when you sit down to write?

There’s not really a formula. You either have the sense that there’s a director here with an idea of what he or she wants to do, or it’s just a bunch of elements that some agent has brought together, or it’s something in between. One of the things I like about watching old films and researching unknown directors is feeling that voice emerging from a field of chaos. If you’ve seen forty films by Lew Landers, suddenly you feel that there is a Lew Landers personality, and you feel an individual emerging from the work, which is really exciting. There’s either a personality there, or an idea of what a movie should be, more than profound philosophical insights, which are hard to come by. If that’s what you’re looking for all the time, you’re not going to find them very often. Does that approach have special relevance for some of these older Hollywood films, whose directors were working within more rigid constraints?

That’s the amazing thing. I begin to suspect after all these years of watching tons and tons of Hollywood movies that a lot of the stuff about how the studio system controlled everybody is baloney. I think a strong director could have a lot of freedom within that system. The ones who wanted to be cogs were cogs, and that’s fine—Robert Z. Leonard was perfectly content making eleven Jeanette MacDonald musicals—but Borzage at MGM could seize the opportunity and make something. I don’t think the whole system is as oppressive as people like to say it is, including the filmmakers, who loved to complain and say “they wouldn’t let me do what I wanted to do.” But here’s this astonishing body of work. You can’t argue with that. John Ford tells you that all of his masterpieces were potboilers, and I have to respectfully disagree. There’s a myth circulating that, apart from a small stable of geniuses, Hollywood was mostly populated by talented craftsmen working inside genre constraints. But those directors made some astonishing films, which—as you pointed out earlier—haven’t been getting regularly shown. 35