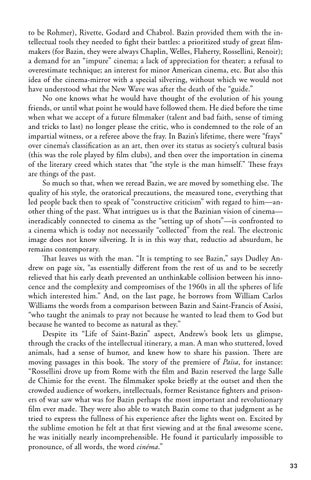 to be Rohmer), Rivette, Godard and Chabrol. Bazin provided them with the intellectual tools they needed to fight their battles: a prioritized study of great filmmakers (for Bazin, they were always Chaplin, Welles, Flaherty, Rossellini, Renoir); a demand for an “impure” cinema; a lack of appreciation for theater; a refusal to overestimate technique; an interest for minor American cinema, etc. But also this idea of the cinema-mirror with a special silvering, without which we would not have understood what the New Wave was after the death of the “guide.” No one knows what he would have thought of the evolution of his young friends, or until what point he would have followed them. He died before the time when what we accept of a future filmmaker (talent and bad faith, sense of timing and tricks to last) no longer please the critic, who is condemned to the role of an impartial witness, or a referee above the fray. In Bazin’s lifetime, there were “frays” over cinema’s classification as an art, then over its status as society’s cultural basis (this was the role played by film clubs), and then over the importation in cinema of the literary creed which states that “the style is the man himself.” These frays are things of the past. So much so that, when we reread Bazin, we are moved by something else. The quality of his style, the oratorical precautions, the measured tone, everything that led people back then to speak of “constructive criticism” with regard to him—another thing of the past. What intrigues us is that the Bazinian vision of cinema— ineradicably connected to cinema as the “setting up of shots”—is confronted to a cinema which is today not necessarily “collected” from the real. The electronic image does not know silvering. It is in this way that, reductio ad absurdum, he remains contemporary. That leaves us with the man. “It is tempting to see Bazin,” says Dudley Andrew on page six, “as essentially different from the rest of us and to be secretly relieved that his early death prevented an unthinkable collision between his innocence and the complexity and compromises of the 1960s in all the spheres of life which interested him.” And, on the last page, he borrows from William Carlos Williams the words from a comparison between Bazin and Saint-Francis of Assisi, “who taught the animals to pray not because he wanted to lead them to God but because he wanted to become as natural as they.” Despite its “Life of Saint-Bazin” aspect, Andrew’s book lets us glimpse, through the cracks of the intellectual itinerary, a man. A man who stuttered, loved animals, had a sense of humor, and knew how to share his passion. There are moving passages in this book. The story of the premiere of Païsa, for instance: “Rossellini drove up from Rome with the film and Bazin reserved the large Salle de Chimie for the event. The filmmaker spoke briefly at the outset and then the crowded audience of workers, intellectuals, former Resistance fighters and prisoners of war saw what was for Bazin perhaps the most important and revolutionary film ever made. They were also able to watch Bazin come to that judgment as he tried to express the fullness of his experience after the lights went on. Excited by the sublime emotion he felt at that first viewing and at the final awesome scene, he was initially nearly incomprehensible. He found it particularly impossible to pronounce, of all words, the word cinéma.” 33