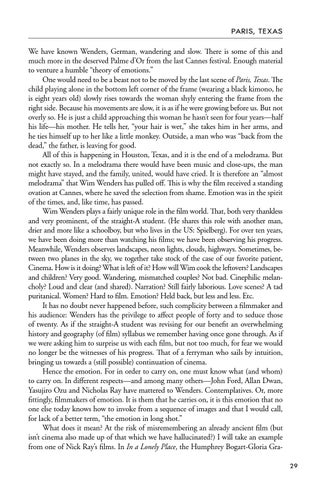 paris, texas We have known Wenders, German, wandering and slow. There is some of this and much more in the deserved Palme d’Or from the last Cannes festival. Enough material to venture a humble “theory of emotions.” One would need to be a beast not to be moved by the last scene of Paris, Texas. The child playing alone in the bottom left corner of the frame (wearing a black kimono, he is eight years old) slowly rises towards the woman shyly entering the frame from the right side. Because his movements are slow, it is as if he were growing before us. But not overly so. He is just a child approaching this woman he hasn’t seen for four years—half his life—his mother. He tells her, “your hair is wet,” she takes him in her arms, and he ties himself up to her like a little monkey. Outside, a man who was “back from the dead,” the father, is leaving for good. All of this is happening in Houston, Texas, and it is the end of a melodrama. But not exactly so. In a melodrama there would have been music and close-ups, the man might have stayed, and the family, united, would have cried. It is therefore an “almost melodrama” that Wim Wenders has pulled off. This is why the film received a standing ovation at Cannes, where he saved the selection from shame. Emotion was in the spirit of the times, and, like time, has passed. Wim Wenders plays a fairly unique role in the film world. That, both very thankless and very prominent, of the straight-A student. (He shares this role with another man, drier and more like a schoolboy, but who lives in the US: Spielberg). For over ten years, we have been doing more than watching his films; we have been observing his progress. Meanwhile, Wenders observes landscapes, neon lights, clouds, highways. Sometimes, between two planes in the sky, we together take stock of the case of our favorite patient, Cinema. How is it doing? What is left of it? How will Wim cook the leftovers? Landscapes and children? Very good. Wandering, mismatched couples? Not bad. Cinephilic melancholy? Loud and clear (and shared). Narration? Still fairly laborious. Love scenes? A tad puritanical. Women? Hard to film. Emotion? Held back, but less and less. Etc. It has no doubt never happened before, such complicity between a filmmaker and his audience: Wenders has the privilege to affect people of forty and to seduce those of twenty. As if the straight-A student was revising for our benefit an overwhelming history and geography (of film) syllabus we remember having once gone through. As if we were asking him to surprise us with each film, but not too much, for fear we would no longer be the witnesses of his progress. That of a ferryman who sails by intuition, bringing us towards a (still possible) continuation of cinema. Hence the emotion. For in order to carry on, one must know what (and whom) to carry on. In different respects—and among many others—John Ford, Allan Dwan, Yasujiro Ozu and Nicholas Ray have mattered to Wenders. Contemplatives. Or, more fittingly, filmmakers of emotion. It is them that he carries on, it is this emotion that no one else today knows how to invoke from a sequence of images and that I would call, for lack of a better term, “the emotion in long shot.” What does it mean? At the risk of misremembering an already ancient film (but isn’t cinema also made up of that which we have hallucinated?) I will take an example from one of Nick Ray’s films. In In a Lonely Place, the Humphrey Bogart-Gloria Gra29