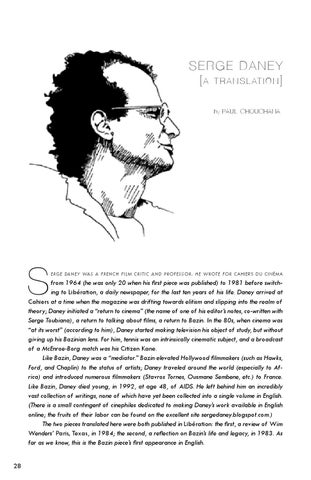 erge daney was a french film critic and professor . he wrote for cahiers du cinéma

from 1964 (he was only 20 when his first piece was published) to 1981 before switching to Libération, a daily newspaper, for the last ten years of his life. Daney arrived at Cahiers at a time when the magazine was drifting towards elitism and slipping into the realm of theory; Daney initiated a “return to cinema” (the name of one of his editor’s notes, co-written with Serge Toubiana), a return to talking about films, a return to Bazin. In the 80s, when cinema was “at its worst” (according to him), Daney started making television his object of study, but without giving up his Bazinian lens. For him, tennis was an intrinsically cinematic subject, and a broadcast of a McEnroe-Borg match was his Citizen Kane. Like Bazin, Daney was a “mediator.” Bazin elevated Hollywood filmmakers (such as Hawks, Ford, and Chaplin) to the status of artists; Daney traveled around the world (especially to Africa) and introduced numerous filmmakers (Stavros Tornes, Ousmane Sembene, etc.) to France. Like Bazin, Daney died young, in 1992, at age 48, of AIDS. He left behind him an incredibly vast collection of writings, none of which have yet been collected into a single volume in English. (There is a small contingent of cinephiles dedicated to making Daney’s work available in English online; the fruits of their labor can be found on the excellent site sergedaney.blogspot.com.) The two pieces translated here were both published in Libération: the first, a review of Wim Wenders’ Paris, Texas, in 1984; the second, a reflection on Bazin’s life and legacy, in 1983. As far as we know, this is the Bazin piece’s first appearance in English. 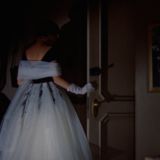