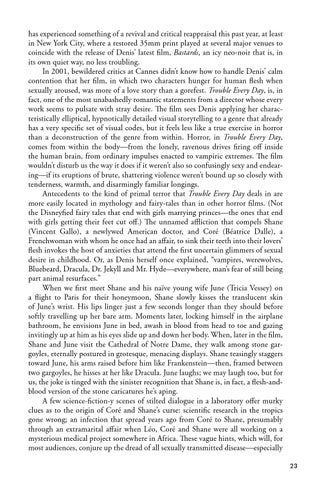 has experienced something of a revival and critical reappraisal this past year, at least in New York City, where a restored 35mm print played at several major venues to coincide with the release of Denis’ latest film, Bastards, an icy neo-noir that is, in its own quiet way, no less troubling. In 2001, bewildered critics at Cannes didn’t know how to handle Denis’ calm contention that her film, in which two characters hunger for human flesh when sexually aroused, was more of a love story than a gorefest. Trouble Every Day, is, in fact, one of the most unabashedly romantic statements from a director whose every work seems to pulsate with stray desire. The film sees Denis applying her characteristically elliptical, hypnotically detailed visual storytelling to a genre that already has a very specific set of visual codes, but it feels less like a true exercise in horror than a deconstruction of the genre from within. Horror, in Trouble Every Day, comes from within the body—from the lonely, ravenous drives firing off inside the human brain, from ordinary impulses enacted to vampiric extremes. The film wouldn’t disturb us the way it does if it weren’t also so confusingly sexy and endearing—if its eruptions of brute, shattering violence weren’t bound up so closely with tenderness, warmth, and disarmingly familiar longings. Antecedents to the kind of primal terror that Trouble Every Day deals in are more easily located in mythology and fairy-tales than in other horror films. (Not the Disneyfied fairy tales that end with girls marrying princes—the ones that end with girls getting their feet cut off.) The unnamed affliction that compels Shane (Vincent Gallo), a newlywed American doctor, and Coré (Béatrice Dalle), a Frenchwoman with whom he once had an affair, to sink their teeth into their lovers’ flesh invokes the host of anxieties that attend the first uncertain glimmers of sexual desire in childhood. Or, as Denis herself once explained, “vampires, werewolves, Bluebeard, Dracula, Dr. Jekyll and Mr. Hyde—everywhere, man’s fear of still being part animal resurfaces.” When we first meet Shane and his naïve young wife June (Tricia Vessey) on a flight to Paris for their honeymoon, Shane slowly kisses the translucent skin of June’s wrist. His lips linger just a few seconds longer than they should before softly travelling up her bare arm. Moments later, locking himself in the airplane bathroom, he envisions June in bed, awash in blood from head to toe and gazing invitingly up at him as his eyes slide up and down her body. When, later in the film, Shane and June visit the Cathedral of Notre Dame, they walk among stone gargoyles, eternally postured in grotesque, menacing displays. Shane teasingly staggers toward June, his arms raised before him like Frankenstein—then, framed between two gargoyles, he hisses at her like Dracula. June laughs; we may laugh too, but for us, the joke is tinged with the sinister recognition that Shane is, in fact, a flesh-andblood version of the stone caricatures he’s aping. A few science-fiction-y scenes of stilted dialogue in a laboratory offer murky clues as to the origin of Coré and Shane’s curse: scientific research in the tropics gone wrong; an infection that spread years ago from Coré to Shane, presumably through an extramarital affair when Léo, Coré and Shane were all working on a mysterious medical project somewhere in Africa. These vague hints, which will, for most audiences, conjure up the dread of all sexually transmitted disease—especially 23