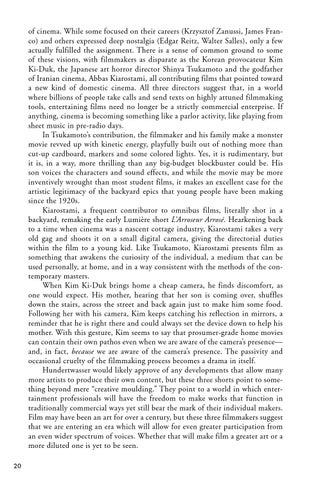 of cinema. While some focused on their careers (Krzysztof Zanussi, James Franco) and others expressed deep nostalgia (Edgar Reitz, Walter Salles), only a few actually fulfilled the assignment. There is a sense of common ground to some of these visions, with filmmakers as disparate as the Korean provocateur Kim Ki-Duk, the Japanese art horror director Shinya Tsukamoto and the godfather of Iranian cinema, Abbas Kiarostami, all contributing films that pointed toward a new kind of domestic cinema. All three directors suggest that, in a world where billions of people take calls and send texts on highly attuned filmmaking tools, entertaining films need no longer be a strictly commercial enterprise. If anything, cinema is becoming something like a parlor activity, like playing from sheet music in pre-radio days. In Tsukamoto’s contribution, the filmmaker and his family make a monster movie revved up with kinetic energy, playfully built out of nothing more than cut-up cardboard, markers and some colored lights. Yes, it is rudimentary, but it is, in a way, more thrilling than any big-budget blockbuster could be. His son voices the characters and sound effects, and while the movie may be more inventively wrought than most student films, it makes an excellent case for the artistic legitimacy of the backyard epics that young people have been making since the 1920s. Kiarostami, a frequent contributor to omnibus films, literally shot in a backyard, remaking the early Lumière short L’Arroseur Arrosé. Hearkening back to a time when cinema was a nascent cottage industry, Kiarostami takes a very old gag and shoots it on a small digital camera, giving the directorial duties within the film to a young kid. Like Tsukamoto, Kiarostami presents film as something that awakens the curiosity of the individual, a medium that can be used personally, at home, and in a way consistent with the methods of the contemporary masters. When Kim Ki-Duk brings home a cheap camera, he finds discomfort, as one would expect. His mother, hearing that her son is coming over, shuffles down the stairs, across the street and back again just to make him some food. Following her with his camera, Kim keeps catching his reflection in mirrors, a reminder that he is right there and could always set the device down to help his mother. With this gesture, Kim seems to say that prosumer-grade home movies can contain their own pathos even when we are aware of the camera’s presence— and, in fact, because we are aware of the camera’s presence. The passivity and occasional cruelty of the filmmaking process becomes a drama in itself. Hundertwasser would likely approve of any developments that allow many more artists to produce their own content, but these three shorts point to something beyond mere “creative moulding.” They point to a world in which entertainment professionals will have the freedom to make works that function in traditionally commercial ways yet still bear the mark of their individual makers. Film may have been an art for over a century, but these three filmmakers suggest that we are entering an era which will allow for even greater participation from an even wider spectrum of voices. Whether that will make film a greater art or a more diluted one is yet to be seen. 20