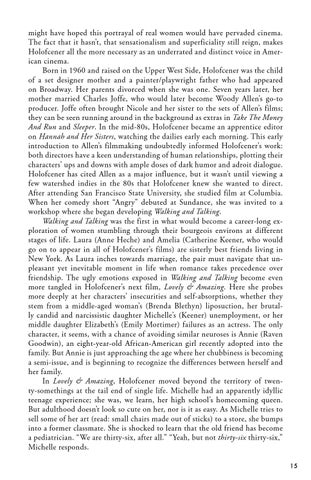 might have hoped this portrayal of real women would have pervaded cinema. The fact that it hasn’t, that sensationalism and superficiality still reign, makes Holofcener all the more necessary as an underrated and distinct voice in American cinema. Born in 1960 and raised on the Upper West Side, Holofcener was the child of a set designer mother and a painter/playwright father who had appeared on Broadway. Her parents divorced when she was one. Seven years later, her mother married Charles Joffe, who would later become Woody Allen’s go-to producer. Joffe often brought Nicole and her sister to the sets of Allen’s films; they can be seen running around in the background as extras in Take The Money And Run and Sleeper. In the mid-80s, Holofcener became an apprentice editor on Hannah and Her Sisters, watching the dailies early each morning. This early introduction to Allen’s filmmaking undoubtedly informed Holofcener’s work: both directors have a keen understanding of human relationships, plotting their characters’ ups and downs with ample doses of dark humor and adroit dialogue. Holofcener has cited Allen as a major influence, but it wasn’t until viewing a few watershed indies in the 80s that Holofcener knew she wanted to direct. After attending San Francisco State University, she studied film at Columbia. When her comedy short “Angry” debuted at Sundance, she was invited to a workshop where she began developing Walking and Talking. Walking and Talking was the first in what would become a career-long exploration of women stumbling through their bourgeois environs at different stages of life. Laura (Anne Heche) and Amelia (Catherine Keener, who would go on to appear in all of Holofcener’s films) are sisterly best friends living in New York. As Laura inches towards marriage, the pair must navigate that unpleasant yet inevitable moment in life when romance takes precedence over friendship. The ugly emotions exposed in Walking and Talking become even more tangled in Holofcener’s next film, Lovely & Amazing. Here she probes more deeply at her characters’ insecurities and self-absorptions, whether they stem from a middle-aged woman’s (Brenda Blethyn) liposuction, her brutally candid and narcissistic daughter Michelle’s (Keener) unemployment, or her middle daughter Elizabeth’s (Emily Mortimer) failures as an actress. The only character, it seems, with a chance of avoiding similar neuroses is Annie (Raven Goodwin), an eight-year-old African-American girl recently adopted into the family. But Annie is just approaching the age where her chubbiness is becoming a semi-issue, and is beginning to recognize the differences between herself and her family. In Lovely & Amazing, Holofcener moved beyond the territory of twenty-somethings at the tail end of single life. Michelle had an apparently idyllic teenage experience; she was, we learn, her high school’s homecoming queen. But adulthood doesn’t look so cute on her, nor is it as easy. As Michelle tries to sell some of her art (read: small chairs made out of sticks) to a store, she bumps into a former classmate. She is shocked to learn that the old friend has become a pediatrician. “We are thirty-six, after all.” “Yeah, but not thirty-six thirty-six,” Michelle responds. 15