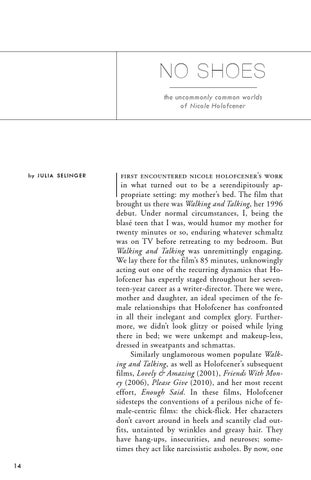 no shoes the uncommonly common worlds of Nicole Holofcener

first encountered nicole holofcener’s work in what turned out to be a serendipitously appropriate setting: my mother’s bed. The film that brought us there was Walking and Talking, her 1996 debut. Under normal circumstances, I, being the blasé teen that I was, would humor my mother for twenty minutes or so, enduring whatever schmaltz was on TV before retreating to my bedroom. But Walking and Talking was unremittingly engaging. We lay there for the film’s 85 minutes, unknowingly acting out one of the recurring dynamics that Holofcener has expertly staged throughout her seventeen-year career as a writer-director. There we were, mother and daughter, an ideal specimen of the female relationships that Holofcener has confronted in all their inelegant and complex glory. Furthermore, we didn’t look glitzy or poised while lying there in bed; we were unkempt and makeup-less, dressed in sweatpants and schmattas. Similarly unglamorous women populate Walking and Talking, as well as Holofcener’s subsequent films, Lovely & Amazing (2001), Friends With Money (2006), Please Give (2010), and her most recent effort, Enough Said. In these films, Holofcener sidesteps the conventions of a perilous niche of female-centric films: the chick-flick. Her characters don’t cavort around in heels and scantily clad outfits, untainted by wrinkles and greasy hair. They have hang-ups, insecurities, and neuroses; sometimes they act like narcissistic assholes. By now, one