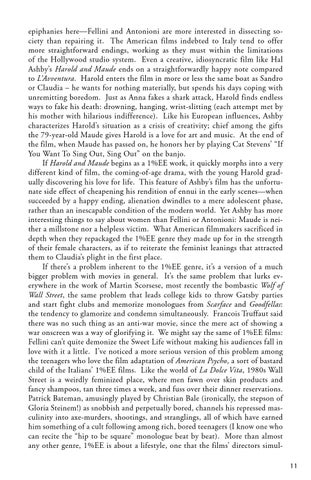 epiphanies here—Fellini and Antonioni are more interested in dissecting society than repairing it. The American films indebted to Italy tend to offer more straightforward endings, working as they must within the limitations of the Hollywood studio system. Even a creative, idiosyncratic film like Hal Ashby’s Harold and Maude ends on a straightforwardly happy note compared to L’Avventura. Harold enters the film in more or less the same boat as Sandro or Claudia – he wants for nothing materially, but spends his days coping with unremitting boredom. Just as Anna fakes a shark attack, Harold finds endless ways to fake his death: drowning, hanging, wrist-slitting (each attempt met by his mother with hilarious indifference). Like his European influences, Ashby characterizes Harold’s situation as a crisis of creativity; chief among the gifts the 79-year-old Maude gives Harold is a love for art and music. At the end of the film, when Maude has passed on, he honors her by playing Cat Stevens’ “If You Want To Sing Out, Sing Out” on the banjo. If Harold and Maude begins as a 1%EE work, it quickly morphs into a very different kind of film, the coming-of-age drama, with the young Harold gradually discovering his love for life. This feature of Ashby’s film has the unfortunate side effect of cheapening his rendition of ennui in the early scenes—when succeeded by a happy ending, alienation dwindles to a mere adolescent phase, rather than an inescapable condition of the modern world. Yet Ashby has more interesting things to say about women than Fellini or Antonioni: Maude is neither a millstone nor a helpless victim. What American filmmakers sacrificed in depth when they repackaged the 1%EE genre they made up for in the strength of their female characters, as if to reiterate the feminist leanings that attracted them to Claudia’s plight in the first place. If there’s a problem inherent to the 1%EE genre, it’s a version of a much bigger problem with movies in general. It’s the same problem that lurks everywhere in the work of Martin Scorsese, most recently the bombastic Wolf of Wall Street, the same problem that leads college kids to throw Gatsby parties and start fight clubs and memorize monologues from Scarface and Goodfellas: the tendency to glamorize and condemn simultaneously. Francois Truffaut said there was no such thing as an anti-war movie, since the mere act of showing a war onscreen was a way of glorifying it. We might say the same of 1%EE films: Fellini can’t quite demonize the Sweet Life without making his audiences fall in love with it a little. I’ve noticed a more serious version of this problem among the teenagers who love the film adaptation of American Psycho, a sort of bastard child of the Italians’ 1%EE films. Like the world of La Dolce Vita, 1980s Wall Street is a weirdly feminized place, where men fawn over skin products and fancy shampoos, tan three times a week, and fuss over their dinner reservations. Patrick Bateman, amusingly played by Christian Bale (ironically, the stepson of Gloria Steinem!) as snobbish and perpetually bored, channels his repressed masculinity into axe-murders, shootings, and stranglings, all of which have earned him something of a cult following among rich, bored teenagers (I know one who can recite the “hip to be square” monologue beat by beat). More than almost any other genre, 1%EE is about a lifestyle, one that the films’ directors simul11