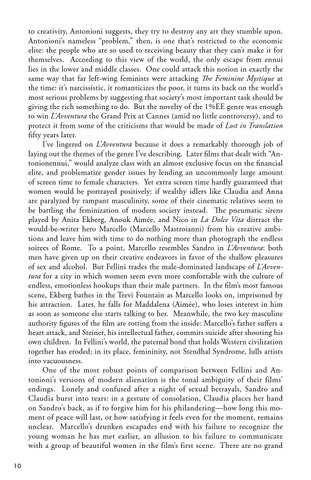 to creativity, Antonioni suggests, they try to destroy any art they stumble upon. Antonioni’s nameless “problem,” then, is one that’s restricted to the economic elite: the people who are so used to receiving beauty that they can’t make it for themselves. According to this view of the world, the only escape from ennui lies in the lower and middle classes. One could attack this notion in exactly the same way that far left-wing feminists were attacking The Feminine Mystique at the time: it’s narcissistic, it romanticizes the poor, it turns its back on the world’s most serious problems by suggesting that society’s most important task should be giving the rich something to do. But the novelty of the 1%EE genre was enough to win L’Avventura the Grand Prix at Cannes (amid no little controversy), and to protect it from some of the criticisms that would be made of Lost in Translation fifty years later. I’ve lingered on L’Avventura because it does a remarkably thorough job of laying out the themes of the genre I’ve describing. Later films that dealt with “Antonionennui,” would analyze class with an almost exclusive focus on the financial elite, and problematize gender issues by lending an uncommonly large amount of screen time to female characters. Yet extra screen time hardly guaranteed that women would be portrayed positively: if wealthy idlers like Claudia and Anna are paralyzed by rampant masculinity, some of their cinematic relatives seem to be battling the feminization of modern society instead. The pneumatic sirens played by Anita Ekberg, Anouk Aimée, and Nico in La Dolce Vita distract the would-be-writer hero Marcello (Marcello Mastroianni) from his creative ambitions and leave him with time to do nothing more than photograph the endless soirees of Rome. To a point, Marcello resembles Sandro in L’Avventura: both men have given up on their creative endeavors in favor of the shallow pleasures of sex and alcohol. But Fellini trades the male-dominated landscape of L’Avventura for a city in which women seem even more comfortable with the culture of endless, emotionless hookups than their male partners. In the film’s most famous scene, Ekberg bathes in the Trevi Fountain as Marcello looks on, imprisoned by his attraction. Later, he falls for Maddalena (Aimée), who loses interest in him as soon as someone else starts talking to her. Meanwhile, the two key masculine authority figures of the film are rotting from the inside: Marcello’s father suffers a heart attack, and Steiner, his intellectual father, commits suicide after shooting his own children. In Fellini’s world, the paternal bond that holds Western civilization together has eroded; in its place, femininity, not Stendhal Syndrome, lulls artists into vacuousness. One of the most robust points of comparison between Fellini and Antonioni’s versions of modern alienation is the tonal ambiguity of their films’ endings. Lonely and confused after a night of sexual betrayals, Sandro and Claudia burst into tears: in a gesture of consolation, Claudia places her hand on Sandro’s back, as if to forgive him for his philandering—how long this moment of peace will last, or how satisfying it feels even for the moment, remains unclear. Marcello’s drunken escapades end with his failure to recognize the young woman he has met earlier, an allusion to his failure to communicate with a group of beautiful women in the film’s first scene. There are no grand 10