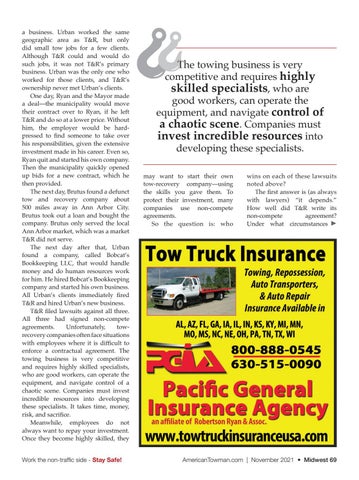 a business. Urban worked the same geographic area as T&amp;R, but only did small tow jobs for a few clients. Although T&amp;R could and would do such jobs, it was not T&amp;R’s primary business. Urban was the only one who worked for those clients, and T&amp;R’s ownership never met Urban’s clients. One day, Ryan and the Mayor made a deal—the municipality would move their contract over to Ryan, if he left T&amp;R and do so at a lower price. Without him, the employer would be hardpressed to find someone to take over his responsibilities, given the extensive investment made in his career. Even so, Ryan quit and started his own company. Then the municipality quickly opened up bids for a new contract, which he then provided. The next day, Brutus found a defunct tow and recovery company about 500 miles away in Ann Arbor City. Brutus took out a loan and bought the company. Brutus only served the local Ann Arbor market, which was a market T&amp;R did not serve. The next day after that, Urban found a company, called Bobcat’s Bookkeeping LLC, that would handle money and do human resources work for him. He hired Bobcat’s Bookkeeping company and started his own business. All Urban’s clients immediately fired T&amp;R and hired Urban’s new business. T&amp;R filed lawsuits against all three. All three had signed non-compete agreements. Unfortunately, towrecovery companies often face situations with employees where it is difficult to enforce a contractual agreement. The towing business is very competitive and requires highly skilled specialists, who are good workers, can operate the equipment, and navigate control of a chaotic scene. Companies must invest incredible resources into developing these specialists. It takes time, money, risk, and sacrifice. Meanwhile, employees do not always want to repay your investment. Once they become highly skilled, they Work the non-traffic side - Stay Safe!

The towing business is very competitive and requires highly skilled specialists, who are good workers, can operate the equipment, and navigate control of a chaotic scene. Companies must invest incredible resources into developing these specialists. may want to start their own tow-recovery company—using the skills you gave them. To protect their investment, many companies use non-compete agreements. So the question is: who

wins on each of these lawsuits noted above? The first answer is (as always with lawyers) “it depends.” How well did T&amp;R write its non-compete agreement? Under what circumstances