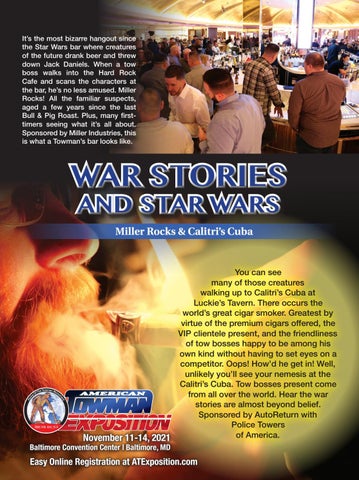 It’s the most bizarre hangout since the Star Wars bar where creatures of the future drank beer and threw down Jack Daniels. When a tow boss walks into the Hard Rock Cafe and scans the characters at the bar, he’s no less amused. Miller Rocks! All the familiar suspects, aged a few years since the last Bull & Pig Roast. Plus, many firsttimers seeing what it’s all about. Sponsored by Miller Industries, this is what a Towman’s bar looks like.

You can see many of those creatures walking up to Calitri’s Cuba at Luckie’s Tavern. There occurs the world’s great cigar smoker. Greatest by virtue of the premium cigars offered, the VIP clientele present, and the friendliness of tow bosses happy to be among his own kind without having to set eyes on a competitor. Oops! How’d he get in! Well, unlikely you’ll see your nemesis at the Calitri’s Cuba. Tow bosses present come from all over the world. Hear the war stories are almost beyond belief. Sponsored by AutoReturn with Police Towers of America. November 11-14, 2021 Baltimore Convention Center | Baltimore, MD