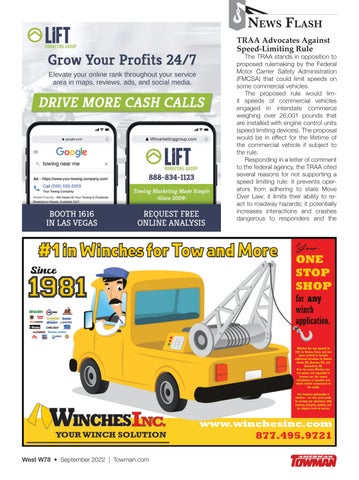 The TRAA stands in opposition to proposed rulemaking by the Federal Motor Carrier Safety Administration (FMCSA) that could limit speeds on some commercial vehicles. The proposed rule would limit speeds of commercial vehicles engaged in interstate commerce weighing over 26,001 pounds that are installed with engine control units (speed limiting devices). The proposal would be in effect for the lifetime of the commercial vehicle if subject to the rule. Responding in a letter of comment to the federal agency, the TRAA cited several reasons for not supporting a speed limiting rule: it prevents operators from adhering to state Move Over Law; it limits their ability to react to roadway hazards; it potentially increases interactions and crashes dangerous to responders and the