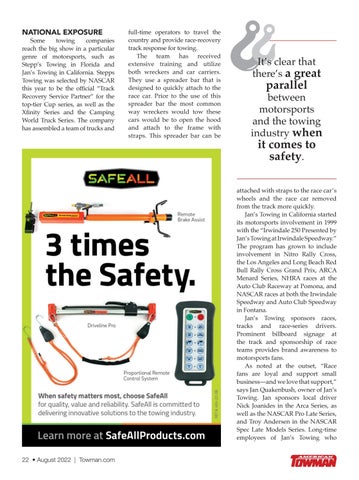 Some towing companies reach the big show in a particular genre of motorsports, such as Stepp’s Towing in Florida and Jan’s Towing in California. Stepps Towing was selected by NASCAR this year to be the official “Track Recovery Service Partner” for the top-tier Cup series, as well as the Xfinity Series and the Camping World Truck Series. The company has assembled a team of trucks and

full-time operators to travel the country and provide race-recovery track response for towing. The team has received extensive training and utilize both wreckers and car carriers. They use a spreader bar that is designed to quickly attach to the race car. Prior to the use of this spreader bar the most common way wreckers would tow these cars would be to open the hood and attach to the frame with straps. This spreader bar can be

It’s clear that there’s a great

between motorsports and the towing industry when

it comes to safety.

attached with straps to the race car’s wheels and the race car removed from the track more quickly. Jan’s Towing in California started its motorsports involvement in 1999 with the “Irwindale 250 Presented by Jan’s Towing at Irwindale Speedway.” The program has grown to include involvement in Nitro Rally Cross, the Los Angeles and Long Beach Red Bull Rally Cross Grand Prix, ARCA Menard Series, NHRA races at the Auto Club Raceway at Pomona, and NASCAR races at both the Irwindale Speedway and Auto Club Speedway in Fontana. Jan’s Towing sponsors races, tracks and race-series drivers. Prominent billboard signage at the track and sponsorship of race teams provides brand awareness to motorsports fans. As noted at the outset, “Race fans are loyal and support small business—and we love that support,” says Jan Quakenbush, owner of Jan’s Towing. Jan sponsors local driver Nick Joanides in the Arca Series, as well as the NASCAR Pro Late Series, and Troy Andersen in the NASCAR Spec Late Models Series. Long-time employees of Jan’s Towing who 22 • August 2022 | Towman.com