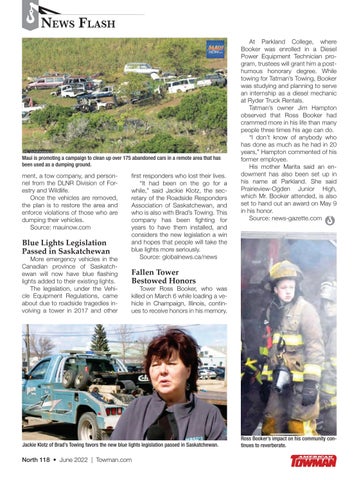 Maui is promoting a campaign to clean up over 175 abandoned cars in a remote area that has been used as a dumping ground.

ment, a tow company, and personnel from the DLNR Division of Forestry and Wildlife. Once the vehicles are removed, the plan is to restore the area and enforce violations of those who are dumping their vehicles. Source: mauinow.com

More emergency vehicles in the Canadian province of Saskatchewan will now have blue flashing lights added to their existing lights. The legislation, under the Vehicle Equipment Regulations, came about due to roadside tragedies involving a tower in 2017 and other

first responders who lost their lives. “It had been on the go for a while,” said Jackie Klotz, the secretary of the Roadside Responders Association of Saskatchewan, and who is also with Brad’s Towing. This company has been fighting for years to have them installed, and considers the new legislation a win and hopes that people will take the blue lights more seriously. Source: globalnews.ca/news

At Parkland College, where Booker was enrolled in a Diesel Power Equipment Technician program, trustees will grant him a posthumous honorary degree. While towing for Tatman’s Towing, Booker was studying and planning to serve an internship as a diesel mechanic at Ryder Truck Rentals. Tatman’s owner Jim Hampton observed that Ross Booker had crammed more in his life than many people three times his age can do. “I don’t know of anybody who has done as much as he had in 20 years,” Hampton commented of his former employee. His mother Marita said an endowment has also been set up in his name at Parkland. She said Prairieview-Ogden Junior High, which Mr. Booker attended, is also set to hand out an award on May 9 in his honor. Source: news-gazette.com

Tower Ross Booker, who was killed on March 6 while loading a vehicle in Champaign, Illinois, continues to receive honors in his memory.

Ross Booker’s impact on his community continues to reverberate.