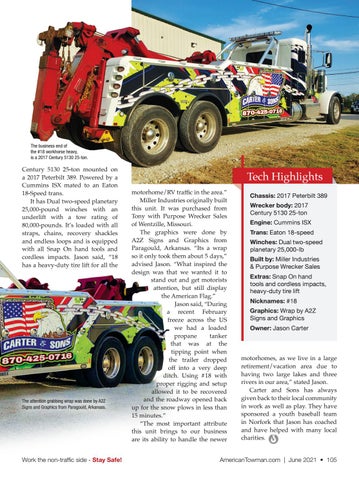 Century 5130 25-ton mounted on a 2017 Peterbilt 389. Powered by a Cummins ISX mated to an Eaton 18-Speed trans. It has Dual two-speed planetary 25,000-pound winches with an underlift with a tow rating of 80,000-pounds. It’s loaded with all straps, chains, recovery shackles and endless loops and is equipped with all Snap On hand tools and cordless impacts. Jason said, “18 has a heavy-duty tire lift for all the

The attention grabbing wrap was done by A2Z Signs and Graphics from Paragould, Arkansas.

Tech Highlights motorhome/RV traffic in the area.” Miller Industries originally built this unit. It was purchased from Tony with Purpose Wrecker Sales of Wentzille, Missouri. The graphics were done by A2Z Signs and Graphics from Paragould, Arkansas. “Its a wrap so it only took them about 5 days,” advised Jason. “What inspired the design was that we wanted it to stand out and get motorists attention, but still display the American Flag.” Jason said, “During a recent February freeze across the US we had a loaded propane tanker that was at the tipping point when the trailer dropped off into a very deep ditch. Using #18 with proper rigging and setup allowed it to be recovered and the roadway opened back up for the snow plows in less than 15 minutes.” “The most important attribute this unit brings to our business are its ability to handle the newer

motorhomes, as we live in a large retirement/vacation area due to having two large lakes and three rivers in our area,” stated Jason. Carter and Sons has always given back to their local community in work as well as play. They have sponsored a youth baseball team in Norfork that Jason has coached and have helped with many local charities.