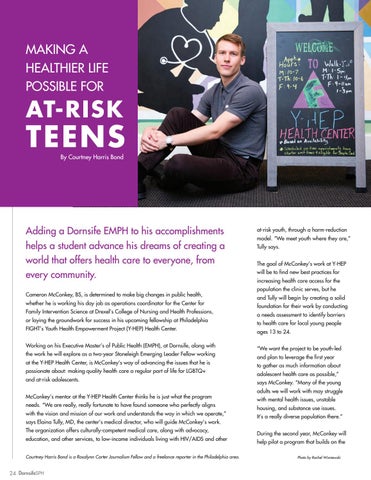 MAKING A HEALTHIER LIFE POSSIBLE FOR

results of the needs assessment to begin

and social services built for society’s

intends to earn Dornsife’s certificate in

most marginalized people are the

LBGTQ+ health once he is through with

care to the vulnerable populations

his EMPH. He is also encouraged by the

outside the clinic’s walls. McConkey’s

McConkey says. “As an out and proud

support and recognition he has received

current ideas include a mobile van with

member of the LGBTQ+ community who

along the way. He was recently awarded

benefits from a great deal of white and

the Jonathan Lax Scholarship for Gay

perhaps partnering in some way with the

cisgender privilege, I carry a sense of

Men from the Bread and Roses

obligation to pay forward the activism

Community Fund, and the Drexel

that has afforded me much of the

freedom I have today.”

Engagement from the Graduate College. The Jonathan Lax Scholarship will help

“It’s easy to get excited about what

“This freedom does not exist for all

pay for not only his LGBTQ+ health

McConkey says. But what is really

people in the LGBTQ+ community; we

certificate but also for part of his EMPH.

important is “being intentional in

know that health disparities within this

with the adolescents who are there now

at Y-HEP and making myself accessible

individuals and those with multiple

and has given him the leeway to

to youth networks. This is going to be

really important when it comes to gathering information.” The goal is not to develop a new model

Adding a Dornsife EMPH to his accomplishments helps a student advance his dreams of creating a world that offers health care to everyone, from every community. Cameron McConkey, BS, is determined to make big changes in public health, whether he is working his day job as operations coordinator for the Center for Family Intervention Science at Drexel’s College of Nursing and Health Professions, or laying the groundwork for success in his upcoming fellowship at Philadelphia FIGHT’s Youth Health Empowerment Project (Y-HEP) Health Center. Working on his Executive Master’s of Public Health (EMPH), at Dornsife, along with the work he will explore as a two-year Stoneleigh Emerging Leader Fellow working at the Y-HEP Health Center, is McConkey’s way of advancing the issues that he is passionate about: making quality health care a regular part of life for LGBTQ+ and at-risk adolescents. McConkey’s mentor at the Y-HEP Health Center thinks he is just what the program needs. “We are really, really fortunate to have found someone who perfectly aligns with the vision and mission of our work and understands the way in which we operate,” says Elaina Tully, MD, the center’s medical director, who will guide McConkey’s work. The organization offers culturally-competent medical care, along with advocacy, education, and other services, to low-income individuals living with HIV/AIDS and other Courtney Harris Bond is a Rosalynn Carter Journalism Fellow and a freelance reporter in the Philadelphia area.

at-risk youth, through a harm-reduction model. “We meet youth where they are,” Tully says.

of health care to enhance clinic capacity. McConkey says, it is to focus on improving circumstances for individuals at the greatest risk and who are least

The goal of McConkey’s work at Y-HEP will be to find new best practices for increasing health care access for the population the clinic serves, but he and Tully will begin by creating a solid foundation for their work by conducting a needs assessment to identify barriers to health care for local young people ages 13 to 24. “We want the project to be youth-led and plan to leverage the first year to gather as much information about adolescent health care as possible,” says McConkey. “Many of the young adults we will work with may struggle with mental health issues, unstable housing, and substance use issues. It’s a really diverse population there.” During the second year, McConkey will help pilot a program that builds on the Photo by Rachel Wisniewski

engaged in care. “Each additional

success is huge. It’s more about the

quality of those individual successes than the quantity.”

across the United States, work that will

help him in his fellowship and beyond.

other agencies and cities,” McConkey

“When I consider what LGBTQ+ health

When he is taking a break from his

adds. He sees his work on his EMPH at

means to me, I think about building

civic engagement and working on

Dornsife as key to helping him succeed

health and social equity both within

in his fellowship as he learns to examine

the LGBTQ+ community and between

health and community, McConkey, a

the world through a “social justice lens.”

Pennsylvania native who grew up in

Ultimately, they hope to have a “model that can be implemented in

individuals. I think about health

Uniontown, is also a self-described

His EMPH thesis is entitled “Strategies

programs that are inclusive and

“outdoor enthusiast,” who loves to

respectful of all people, regardless of

Education and Inclusion in a College

of Nursing and Health Professions.”

and sexual orientation. I think about

For his work at Philadelphia FIGHT,

The focus is on finding strategies for

local, state and federal policies that

as a patient advocate. I feel an immense

sense of responsibility in hearing these

discrimination, which directly relate to

stories and bringing them back to effect

change. I want to do what I can to elevate these adolescent voices and

Determined to learn as much as he can

do what I can to better their health

The Spring/Summer 2019 Issue from Drexel University's Dornsife School of Public Health. This issue includes stories on urban health, understanding autism, the power of policy, and health care for at-risk teens,