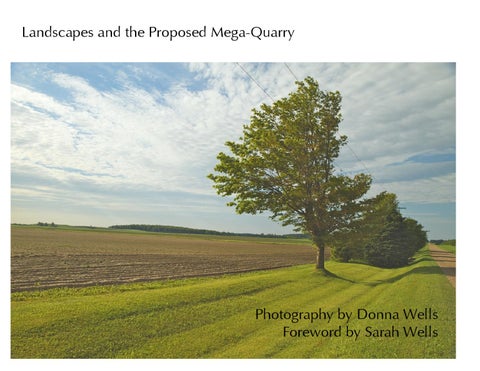 Foreword About an hour north of Toronto one encounters rolling hills, crisp morning air, rich agricultural farmland and the headwaters of five major river systems. It is a place my family has called a home away from home for twenty-five years. Artists are well established in the area and, more abundantly, farmers have been living on and working the land for well over a century. The region is known as the Dufferin County and at its north end lies the Township of Melancthon. Melancthon Township has, by all accounts, a strong agricultural history where farmers raise livestock and crops including hay, wheat and potatoes, and, in recent years, fruit and soybeans. Within and around Melancthon Township, small farming communities now find themselves divided or, by at least one account, “torn apart”. Across the same tracts of land an unprecedented alliance has formed between urban retirees, artists, farmers, and members of First Nations communities. Igniting debate, and reshaping both the land and politics of the area, is the application by an American-owned company to dig a vast hole in the heart of the region: The Township of Melancthon is the site of the largest proposed quarry in the province of Ontario and, possibly, in all of North America. Few details surrounding the proposed quarry are not subject to debate. Yet, what is certain is that The Highland Companies, controlled by Boston-based hedge fund the Baupost Group, has proposed the largest quarry ever built in Ontario. Its lands are to extend five kilometres across (2316 acres total) and its depth is anticipated at over 200 feet. A “mega-quarry” is defined as having a rock reserve of at least 3

150 million tonnes; the reserve now owned by The Highland Companies in Melancthon Township is estimated at 1 billion tonnes. The quarry’s purpose is the extraction of high-quality limestone deposits, which lie beneath the rich agricultural land. The limestone, once crushed and graded, will form an aggregate sought by the construction industry within our province, and beyond. The extent of deception surrounding The Highland Companies’ acquisition of land in Melancthon Township is less certain. By some accounts, land was acquired under the guise of a local man and his shell company, misleading farmers and other residents as to the long-term intent of land purchases. Whether by guise or not, in 2006 the company began buying properties in the area at the inflated price of $8,000 an acre. The company quickly acquired well over 7,500 acres – including the area’s two largest potato farms – and became Ontario’s biggest potato producer. The company also began bulldozing farmhouses and drilling holes in the land, practices not consistent with mere potato farming and raising suspicions among local residents. The Dufferin County is also known as the ‘headwaters’ of Ontario, as it is the source of five major river systems known as the Credit, Humber, Grand, Saugeen and Nottawasaga. Waters sourced here support an array of aquatic life and supply drinking water to over a million people. Water is central to the debate surrounding the mega-quarry. The Highland Companies, in order to keep the quarry dry, will have to pump 600,000,000 litres of groundwater a day away from its site, every day, in perpetuity. The environmental impact of blasting and excavating limestone, and dewatering, circulating and recharging, all day, every day, 600 million litres of water, is simply unknown. 4

Opponents of the quarry also question the impact in terms of noise, dust and pollution levels of the estimated many hundreds of trucks a day that will transport the aggregate away from the quarry site. The social and cultural fabric of the area, the esthetics of its landscapes, the health of its fish and wildlife, the toxicity levels of the land and water, the viability of a ‘local food’ movement, all these and other contentious issues have come into the debate surrounding the proposed mega-quarry. The book of photography that follows does not argue a position or purport to answer the difficult questions. The issues are admittedly complex. We are neither the first nor the last community whose interests may be displaced by the agenda of a multi-national resource extraction company. Around the globe, mining companies contribute simultaneously to growth and destruction: The interests of development and modern ‘essentials’ (roads, buildings, computers and cell phones to name a few) cannot exist without large scale resource extraction that often destroys the local environment and, sometimes even, the life of its inhabitants. Do we care more in this case because it is happening in our own backyard? I would suggest not. Rather, the proposed mega-quarry opens our minds to, and enables us to care more about, the experiences of those globally who wake up feeling displaced, fearful, powerless, or simply questioning the seemingly insatiable demands of ‘development’.

My mother strongly believes that it is important to learn as much as possible about an issue. Her photography is not a zealous argument but rather contemplative and curious. The images as they appear in this book are the culmination of many months of photographing from all angles the landscapes that will be affected by the proposed mega-quarry. I believe, rather than dictating a position, the photographs that follow ask of viewers to consider for themselves: Is there value inherent in the natural beauty of a region? In its lands, waters, and inhabitants? And, if so, when we continue to bow to the allure of development and corporate profit, what is lost?

Sarah Wells, J.D., LL.M. Investigator, activist, and a mother hopeful that the choices we make today leave the world a better place for our children tomorrow.

I have lived in Dufferin County for 25 years enjoying its beauty in terms of the land, the rivers, and the kindness and generosity of the people. Upon hearing more about the proposed mega-quarry, I decided to photograph the areas that will be affected by the quarry both within and surrounding its location. My purpose was to create a visual description of the areas and a way of life that will be altered irreparably. I believe that visual images can sensitize or re-sensitize us, in this case, to nature and its potential destruction. In this project, I employed the photographic techniques of realism and simplicity. Therefore, the landscapes were photographed as they are. In order to avoid distractions that might draw the viewersâ&amp;#x20AC;&amp;#x2122; attention away from such essence, I chose to keep the images as simple and uncluttered as possible. At the same time, I stylized the images photographically using lines, shapes, angles, color and perspective to convey the moving reaction I experienced while seeing and photographing the landscapes. In the photographs displayed, my hope is to create an emotional reaction among viewers and possibly contribute to the on-going debate about how we view and negotiate the use and preservation of our land now and over time.

The Land The following photographs offer views of the land within or immediately adjacent to the proposed mega-quarry.

View of centre of proposed mega-quarry 10

View of centre of proposed mega-quarry 11

View of centre of proposed mega-quarry 12

View of centre of proposed mega-quarry 13

View of west side of proposed mega-quarry 14

View of west side of proposed mega-quarry 16

View of east side of proposed mega-quarry 17

View of east side of proposed mega-quarry 18

View of east side of proposed mega-quarry 19

View from Highway 124 at centre of proposed mega-quarry 20

View from Highway 124 at centre of proposed mega-quarry 21

View of west side of proposed mega-quarry 22

Source waters of the Pine River, within the proposed megaquarry 27

Pine River, east of the proposed mega-quarry, beside the Bruce Trail 28

Pine River Park, east of the proposed mega-quarry, beside the Bruce Trail 29

Grand River near Corbetton, west of the proposed mega-quarry 32

Grand River near Corbetton, west of the proposed mega-quarry 33

Credit River, near Alton, south of the proposed mega-quarry 39

Saugeen River, between Dundalk and Flesherton, west of the proposed mega-quarry 41

Perspectives The following photographs offer views of the changing uses of the land within or immediately adjacent to the proposed mega-quarry.

The Highland Companies facility, north edge of the proposed mega-quarry 51

Worksite with well-head on centre of proposed mega-quarry 52

Sign showing Notice of Application Under the Aggregate Resources Act by The Highland Companies, P.O. Box 377, Shelburne, ON since dismantled 56

About Donna Wells Donna Wells took up photography in the last decade. During this time, she has been instructed and deeply inspired by photographers: Freeman Patterson (Shamper’s Bluff, NB), André Gallant (St. John, NB), Edward Knapp (Toronto, ON &amp; Hull, Quebec), and John McQuade (Toronto: Miksang Contemplative Photography). Photography is a medium that allows Donna to fulfill her love of the outdoors alongside her active lifestyle. In her photography, the purposes are to capture the unbending spirit within all aspects of life, and to stir the emotions in us regarding our intimate relationship (good or bad) to the everyday world. She uses a high-end digital camera, and the photographic approaches of realism, creation of movement in still images, and simplicity. Currently, she is studying mixed media art with oils as a technique to further enhance the feeling and dimensionality communicated in her photos.

Grateful acknowledgements I am grateful for the love and support that my family provided this past summer while I undertook this project “Landscapes and the Proposed Mega-Quarry”: Brent Clode for his technical and editing support, Greg Wells for his editing support, and Robert Wells for being my ‘photographer’s assistant’ and for his kind and thorough critique. A special thanks to Sarah Wells, who most generously and thoughtfully agreed to write the Foreword, and for her editing support. A final thanks to Declan Clode, and Judith and Ingrid Wells who are always there. Additionally, I thank all the people of Dufferin County who I encountered during the time I was photographing and who kindly stopped and shared their thoughts about the proposed mega-quarry. 62

To obtain a hard copy of the book see More Information below (Price includes $10 donation to NDACT www.ndact.com). This book of photographs depicts the Land, the Water, and Perspectives regarding the proposed mega-quarry planned for the township of Melancthon in Dufferin County, 90 minutes north of Toronto.