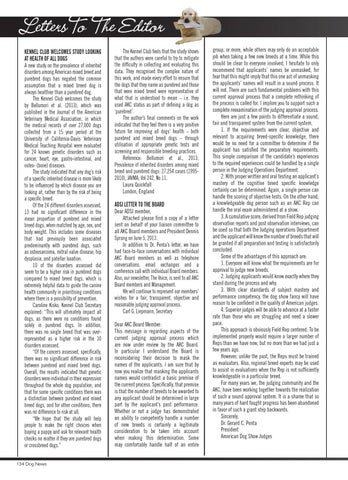 LettersTo The Editor KENNEL CLUB WELCOMES STUDY LOOKING AT HEALTH OF ALL DOGS A new study on the prevalence of inherited disorders among American mixed breed and purebred dogs has negated the common assumption that a mixed breed dog is always healthier than a purebred dog. The Kennel Club welcomes the study by Bellumori et al. (2013), which was published in the Journal of the American Veterinary Medical Association, in which the medical records of over 27,000 dogs collected from a 15 year period at the University of California-Davis Veterinary Medical Teaching Hospital were evaluated for 24 known genetic disorders such as cancer, heart, eye, gastro-intestinal, and osteo- (bone) diseases. The study indicated that any dog’s risk of a specific inherited disease is more likely to be influenced by which disease you are looking at, rather than by the risk of being a specific breed. Of the 24 different disorders assessed, 13 had no significant difference in the mean proportion of purebred and mixed breed dogs, when matched by age, sex, and body weight. This includes some diseases that had previously been associated predominantly with purebred dogs, such as osteosarcoma, mitral valve disease, hip dysplasia, and patellar luxation. 10 of the disorders assessed did seem to be a higher risk in purebred dogs compared to mixed breed dogs, which is extremely helpful data to guide the canine health community in prioritising conditions where there is a possibility of prevention. Caroline Kisko, Kennel Club Secretary explained: “This will ultimately impact all dogs, as there were no conditions found solely in purebred dogs. In addition, there was no single breed that was overrepresented as a higher risk in the 10 disorders assessed. “Of the cancers assessed, specifically, there was no significant difference in risk between purebred and mixed breed dogs. Overall, the results indicated that genetic disorders were individual in their expression throughout the whole dog population, and that for some specific conditions there was a distinction between purebred and mixed breed dogs, and for other conditions, there was no difference to risk at all. “We hope that the study will help people to make the right choices when buying a puppy and ask for relevant health checks no matter if they are purebred dogs or crossbreed dogs.” 134 Dog News

The Kennel Club feels that the study shows that the authors were careful to try to mitigate the difficulty in collecting and evaluating this data. They recognised the complex nature of this work, and made every effort to ensure that the dogs that they name as purebred and those that were mixed breed were representative of what that is understood to mean – i.e. they used AKC status as part of defining a dog as ‘purebred’. The author’s final comments on the work indicated that they feel there is a very positive future for improving all dogs’ health – both purebred and mixed breed dogs – through utilisation of appropriate genetic tests and screening and responsible breeding practices. Reference: Bellumori et al., 2013, Prevalence of inherited disorders among mixed breed and purebred dogs: 27,254 cases (19952010), JAVMA, Vol 242, No 11. Laura Quickfall London, England ADSJ LETTER TO THE BOARD Dear ADSJ member, Attached please find a copy of a letter sent on behalf of your liaison committee to all AKC Board members and President Dennis Sprung on June 5, 2013. In addition to Dr. Penta’s letter, we have had face-to-face conversations with individual AKC Board members as well as telephone conversations, email exchanges and a conference call with individual Board members. Also, our newsletter, The Voice, is sent to all AKC Board members and Management. We will continue to represent our members’ wishes for a fair, transparent, objective and reasonable judging approval process. Carl G. Liepmann, Secretary Dear AKC Board Member: This message is regarding aspects of the current judging approval process which are now under review by the AKC Board. In particular I understand the Board is reconsidering their decision to mask the names of the applicants. I am sure that by now you realize that masking the applicants names would contradict a basic premise of the current process. Specifically, that premise is that the number of breeds to be awarded to any applicant should be determined in large part by the applicant’s past performance. Whether or not a judge has demonstrated an ability to competently handle a number of new breeds is certainly a legitimate consideration to be taken into account when making this determination. Some may comfortably handle half of an entire

group, or more, while others may only do an acceptable job when taking a few new breeds at a time. While this should be clear to everyone involved, I hesitate to only recommend that applicants’ names be unmasked, for fear that this might imply that this one act of unmasking the applicants’ names will result in a sound process. It will not. There are such fundamental problems with this current approval process that a complete rethinking of the process is called for. I implore you to support such a complete reexamination of the judging approval process. Here are just a few points to differentiate a sound, fair and transparent system from the current system. 1. If the requirements were clear, objective and relevant to acquiring breed-specific knowledge, there would be no need for a committee to determine if the applicant has satisfied the preparatory requirements. This simple comparison of the candidate’s experiences to the required experiences could be handled by a single person in the Judging Operations Department. 2. With proper written and oral testing an applicant’s mastery of the cognitive breed specific knowledge certainly can be determined. Again, a single person can handle the scoring of objective tests. On the other hand, a knowledgeable dog person such as an AKC Rep can handle the oral exam administered at a show. 3. A cumulative score, derived from Field Rep judging observation reports and post observation interviews, can be used so that both the Judging operations Department and the applicant will know the number of breeds that will be granted if all preparation and testing is satisfactorily concluded. Some of the advantages of this approach are: 1. Everyone will know what the requirements are for approval to judge new breeds. 2. Judging applicants would know exactly where they stand during the process and why. 3. With clear standards of subject mastery and performance competency, the dog show fancy will have reason to be confident in the quality of American judges. 4. Superior judges will be able to advance at a faster rate than those who are struggling and need a slower pace. This approach is obviously Field Rep centered. To be implemented properly would require a larger number of Reps than we have now, but no more than we had just a few years ago. However, unlike the past, the Reps must be trained as evaluators. Also, regional breed experts may be used to assist in evaluations when the Rep is not sufficiently knowledgeable in a particular breed. For many years we, the judging community and the AKC, have been working together towards the realization of such a sound approval system. It is a shame that so many years of hard fought progress has been abandoned in favor of such a giant step backwards. Sincerely, Dr. Gerard C. Penta President American Dog Show Judges 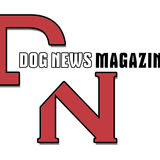