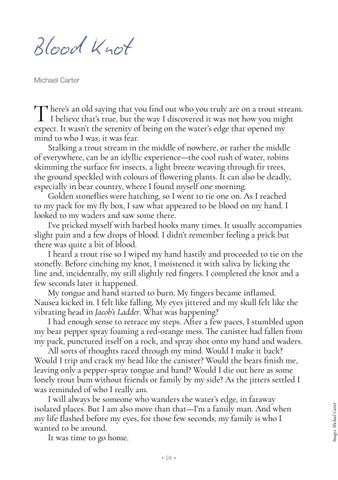 here’s an old saying that you find out who you truly are on a trout stream. I believe that’s true, but the way I discovered it was not how you might expect. It wasn’t the serenity of being on the water’s edge that opened my mind to who I was; it was fear. Stalking a trout stream in the middle of nowhere, or rather the middle of everywhere, can be an idyllic experience—the cool rush of water, robins skimming the surface for insects, a light breeze weaving through fir trees, the ground speckled with colours of flowering plants. It can also be deadly, especially in bear country, where I found myself one morning. Golden stoneflies were hatching, so I went to tie one on. As I reached to my pack for my fly box, I saw what appeared to be blood on my hand. I looked to my waders and saw some there. I’ve pricked myself with barbed hooks many times. It usually accompanies slight pain and a few drops of blood. I didn’t remember feeling a prick but there was quite a bit of blood. I heard a trout rise so I wiped my hand hastily and proceeded to tie on the stonefly. Before cinching my knot, I moistened it with saliva by licking the line and, incidentally, my still slightly red fingers. I completed the knot and a few seconds later it happened. My tongue and hand started to burn. My fingers became inflamed. Nausea kicked in. I felt like falling. My eyes jittered and my skull felt like the vibrating head in Jacob’s Ladder. What was happening? I had enough sense to retrace my steps. After a few paces, I stumbled upon my bear pepper spray foaming a red-orange mess. The canister had fallen from my pack, punctured itself on a rock, and spray shot onto my hand and waders. All sorts of thoughts raced through my mind. Would I make it back? Would I trip and crack my head like the canister? Would the bears finish me, leaving only a pepper-spray tongue and hand? Would I die out here as some lonely trout bum without friends or family by my side? As the jitters settled I was reminded of who I really am. I will always be someone who wanders the water’s edge, in faraway isolated places. But I am also more than that—I’m a family man. And when my life flashed before my eyes, for those few seconds, my family is who I wanted to be around. It was time to go home. l

In the Identity Issue, 22 writers explore how their perceptions of the world around them.