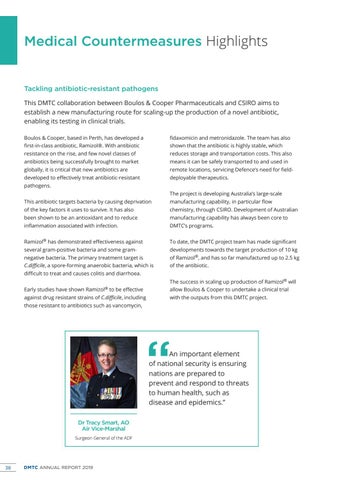 Tackling antibiotic-resistant pathogens This DMTC collaboration between Boulos & Cooper Pharmaceuticals and CSIRO aims to establish a new manufacturing route for scaling-up the production of a novel antibiotic, enabling its testing in clinical trials. Boulos & Cooper, based in Perth, has developed a

fidaxomicin and metronidazole. The team has also

shown that the antibiotic is highly stable, which

resistance on the rise, and few novel classes of

antibiotics being successfully brought to market

means it can be safely transported to and used in

globally, it is critical that new antibiotics are

of the key factors it uses to survive. It has also

chemistry, through CSIRO. Development of Australian

been shown to be an antioxidant and to reduce

manufacturing capability has always been core to

Ramizol® has demonstrated effectiveness against

To date, the DMTC project team has made significant

several gram-positive bacteria and some gram-

developments towards the target production of 10 kg

of Ramizol®, and has so far manufactured up to 2.5 kg

C.difficile, a spore-forming anaerobic bacteria, which is

difficult to treat and causes colitis and diarrhoea. The success in scaling up production of Ramizol® will Early studies have shown Ramizol® to be effective

against drug resistant strains of C.difficile, including

with the outputs from this DMTC project.

those resistant to antibiotics such as vancomycin,

An important element of national security is ensuring nations are prepared to prevent and respond to threats to human health, such as disease and epidemics.” Dr Tracy Smart, AO Air Vice-Marshal Surgeon General of the ADF 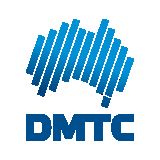