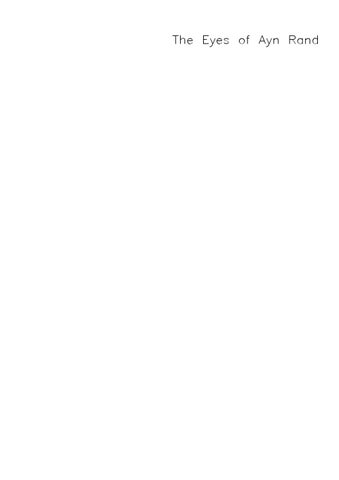 The Eyes of Ayn Rand

The Eyes of Ayn Rand

INTRODUCTION The Eyes of Ayn Rand was initially produced for Performa 11 (New York, 2011). This scripted promenade-style performance was structured as a sequence of events occurring at a series of locations in a large darkened space. Each location was defined by a cluster of objects e.g. a table and/or media devices of various kinds or some spatial characteristic e.g. the stage. Over the course of forty minutes or so, the audience&#39;s trajectory from location to location was guided by a series of light sources which were illuminated and extinguished on cue. As a result, the performance space was, for the most part, illuminated by a single source of light at any one time. Dennis McNulty Berlin, 2013.

LOCATION 0 The audience assemble outside the entrance to St. Patrick Youth Center on Mulberry St., New York. At the appointed time, they are led into a very large space, which is almost completely dark. As they enter, each audience member is handed a pamphlet, sealed in a clear plastic sleeve with a sticker which reads, WAIT FOR INSTRUCTIONS.

LOCATION 1 The audience gather in a circle just inside the main entrance, at the edge of a pool of light created by a single lamp suspended from the ceiling. A single speaker sits on the floor under the lamp facing upwards and an iPhone sits on the floor beside it. WOMAN greets the audience as they enter. After delivering a short monologue, she asks the audience to break the seals on their pamphlets, after which she plays a soundfile on the iPhone. They hear a series of spoken text fragments amplified through the speaker. Each is followed by a beep, indicating to them that they should turn the page. The pamphlet is composed of a series of images cropped from a photograph which was taken in Moscow in 1927 of of Russian architect Konstantin Melnikov&#39;s house. In the image, the house is under construction.

LOCATION 2 MAN is seated at a 1960s style table. On the table is an old portable radio/cassette player, a couple of cassette tapes, a lamp and a small mirror. The table lamp, which is the only source of light, casts MAN&#39;s shadow on the wall behind him. MAN places a tape in the radio/cassette player and presses play. He reads a text from the press release for the Deconstructivist Architecture exhibition, which took place at MoMA in 1988. On finishing, MAN changes the tape to shift the mood and delivers some lines from an interview with Frank Gehry in which he describes the glazing in his house. As he speaks, MAN reflects light from the table lamp upwards with the small mirror, slowly delineating the ceiling tile grid. The monologue is sourced from Sidney Pollack&#39;s documentary Sketches of Frank Gehry.

LOCATION 3 WOMAN stands between a projector screen and a table on which various objects have been placed: a vinyl record, a turntable, an amplifier, an overhead projector and various transparencies. Two large old speakers stand on the floor at either side of the table. A sheet of red lighting gel rests on the overhead projector, bathing the scene in a deep red light. Taking the record from its sleeve, she inspects it before placing it on the turntable. As it rotates, the audience hear a man&#39;s voice, which begins by asking a question. WOMAN responds to it, and a conversation ensues, mainly concerning the programming languages FLOW-MATIC and COBOL. At certain points, WOMAN places transparencies on the overhead projector. These are tinted red by the lighting gel, which remains in place throughout.

LOCATION 4 The stage lights are turned on and the audience are led directly up onto the stage via a small set of steps. They assemble at the back, facing into the main space. Both performers are standing towards the edge of the stage facing the audience. They reenact an exchange between architect Peter Eisenman and TV presenter Charlie Rose. MAN (Charlie Rose) asks WOMAN (Peter Eisenman) a series of questions and she responds to each of them with a series of gestures.

LOCATION 5 The audience are led back down into the main space via a stairs at one side of the stage. A VCR player and a very large old 4:3 TV sit at the edge of the stage. Two chairs and a floor-lamp sit on the floor facing them. When the audience has assembled in front of the TV, MAN turns it on and the stage lights go out, leaving the performers and audience illuminated by the screen&#39;s flickering static. MAN places a VHS tape into the player and presses play. MAN and WOMAN sit down on the two chairs with the audience gathered behind them. Everyone watches TV together.

The screen pulses blue to black and back again, over and over, accompanied by an abstract soundtrack played through a powerful sound-system positioned right at the back of the space. After a time, the image and sound shift. An animation, a woman&#39;s face partially obscured by complex shifting semi-opaque geometry, and accompanied by a deep loud echoing pulsating drift.

Eventually, the animation cuts to black and the credits flash on the screen. It finally cuts back to static again, at which point, the performers stand up, switch off the TV and switch on lamp. They face the audience and bow.

All images of the performance by Paula Court, Courtesy Performa.

A pamphlet I produced to document the eponymous performance I made for Performa 11, New York.