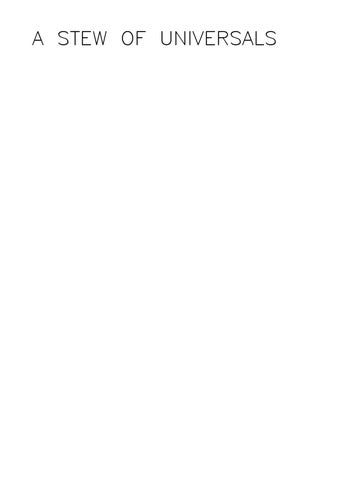 Each day for four months, I tried to alternate between mostly-mind work and mostly-body work. Mixing concrete and coding, soldering wires and editing video, making objects and developing processes.

â&amp;#x20AC;&amp;#x153;The technological singularity is the theoretical emergence of superintelligence through technological means. Since it is believed that the capabilities of such intelligence would be difficult for an unaided human mind to comprehend, the technological singularity is often seen as an occurrence, akin to a singularity, beyond which events cannot be predicted, yet many have made educated guesses about what will follow. The first use of the term &quot;singularity&quot; in this context was by mathematician John von Neumann. In the mid-1950s, von Neumann spoke of &quot;ever accelerating progress of technology and changes in the mode of human life, which gives the appearance of approaching some essential singularity in the history of the race beyond which human affairs, as we know them, could not continue&quot;. The term was popularized by science fiction writer Vernor Vinge, who argues that artificial intelligence, human biological enhancement, or brain-computer interfaces could be possible causes of the singularity. Futurologist Ray Kurzweil, who was recently installed as a director of engineering at Google, cited von Neumann&#39;s use of the term in a foreword to von Neumann&#39;s classic book The Computer and the Brain. In 2005, Kurzweil wrote a book called The Singularity Is Near: When Humans Transcend Biology.â&amp;#x20AC;? Revised from Wikipedia June 2013

All I was hoping to say Concrete, acrylic paint, synthetic mesh and two-way mirror film. (2013)

7-segment LED displays were developed to display digits 0 to 9. Think of old school alarm clocks and their red digits. The 16-segment display adds another 9 LED lines to enable the representation of letters as well as numbers. Information is transmitted by dynamically lighting different combinations of the various segments to form recognisable alphanumeric characters.

I first encountered 16-segment displays in 1981 when they appeared on the cover of the album Ghost in the Machine by British New Wave band The Police. It turned out that the images had actually been generated by the designer to resemble 16-segment displays. Still, it was quite a shock to see those red diagonals.

When people think of New Jersey, they think of industry and infrastructure, logistics and processing. It&#39;s a &#39;thing&#39; place. I always associate it with minimalist sculptor Tony Smith&#39;s now legendary night drive along the unfinished New Jersey turnpike, and Bruce Springsteen, who was born there. I&#39;ve driven through New Jersey on a couple of occasions and the area around the ZKU reminds me of it at times.

In the last decade, digital circuit design and microprocessor programming has made a shift similar to the one that knitting made many years ago, the shift from marketable skill to craft. In 1985, programming micro-controllers was something you needed a degree to do. In 2013, it&#39;s a pastime.

Tegel Airport&#39;s Terminal A is a Brutalist concrete loop whose gate numbering system begins at zero. When coding, computer programmers generally begin counting at zero. I read the airport&#39;s numbering as a latent but deliberate reference on the part of the architect to the digital technologies that were just beginning to puncture the mainstream in the early Seventies. Currently, Tegel&#39;s fate hangs in the balance. It was supposed to have been closed last year, but has been kept open because of the delay in building Brandenburg International. A campaign has begun to preserve the building. Its pre-9/11 layout has high operating costs in terms of human labour and fails to encourage consumption in the way that has become the norm in contemporary airport design. It is a relic of a time when airports were designed to be frictionless components in the flow of air travel.

In Tegel loop (for Leonard Euler), a sequence of shots of terminal A&#39;s gate signs 0 to 9 are arranged according to the order in which their digits appear in Euler&#39;s number. A 10 minute &#39;work in progress&#39; version using the first 100 digits of &#39;e&#39; was shown looping seamlessly on a monitor . When completed, the work will use 600 digits and will be exactly one hour long.

“Consistently, the emphasis in all the material originating from the cement and concrete industry is upon the present possibilities and future potential of concrete, phrases repeated monotonously. Over and over again, we are told that concrete is a material full of possibilities, whose full potential is yet to be realised. This was being said in the early 1900s, the 1960s and is still being said today.” “The denial of history is total: it is not only that concrete is simply new, it is so new that it has not yet happened; it belongs only in future time.” Concrete and Culture Adrian Forty 2012

ABOUT THIS PAMPHLET On June 27th 2013, following a four month residency at the ZKU - Zentrum f端r Kunst und Urbanistik in Moabit, Berlin, I opened my studio space to the public and presented some of the work I had made. I produced a text-only version of this pamphlet to accompany A Stew of Universals. The version you hold in you hands (or view on a screen) includes some documentation images which I have inserted between the texts. Best printed using Adobe Acrobat. In the Page Sizing &amp; Handling section of the Print dialogue, choose Booklet.

ACKNOWLEDGEMENTS Tegel loop (for Leonard Euler) Production assistance: Lisa Blum. Thanks to all at the ZKU. Very special thanks to my fellow residents. All texts by Dennis McNulty unless credited otherwise. All images courtesy Trevor Good.

Pamphlet produced following a presentation of work at the conclusion of a residency at ZK/U, Berlin.