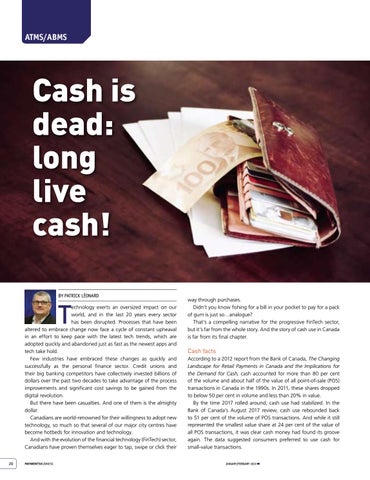 echnology exerts an oversized impact on our world, and in the last 20 years every sector has been disrupted. Processes that have been altered to embrace change now face a cycle of constant upheaval in an effort to keep pace with the latest tech trends, which are adopted quickly and abandoned just as fast as the newest apps and tech take hold. Few industries have embraced these changes as quickly and successfully as the personal finance sector. Credit unions and their big banking competitors have collectively invested billions of dollars over the past two decades to take advantage of the process improvements and significant cost savings to be gained from the digital revolution. But there have been casualties. And one of them is the almighty dollar. Canadians are world-renowned for their willingness to adopt new technology, so much so that several of our major city centres have become hotbeds for innovation and technology. And with the evolution of the financial technology (FinTech) sector, Canadians have proven themselves eager to tap, swipe or click their 20

way through purchases. Didn’t you know fishing for a bill in your pocket to pay for a pack of gum is just so…analogue? That’s a compelling narrative for the progressive FinTech sector, but it’s far from the whole story. And the story of cash use in Canada is far from its final chapter.

Cash facts According to a 2012 report from the Bank of Canada, The Changing Landscape for Retail Payments in Canada and the Implications for the Demand for Cash, cash accounted for more than 80 per cent of the volume and about half of the value of all point-of-sale (POS) transactions in Canada in the 1990s. In 2011, these shares dropped to below 50 per cent in volume and less than 20% in value. By the time 2017 rolled around, cash use had stabilized. In the Bank of Canada’s August 2017 review, cash use rebounded back to 51 per cent of the volume of POS transactions. And while it still represented the smallest value share at 24 per cent of the value of all POS transactions, it was clear cash money had found its groove again. The data suggested consumers preferred to use cash for small-value transactions. January/February 2019