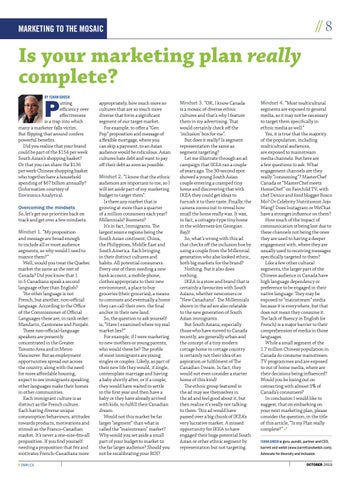 Marketing to the mosaic

Is your marketing plan really complete? By Ishan Ghosh

utting efficiency over effectiveness is a trap into which many a marketer falls victim. But flipping that around confers powerful benefits. Did you realize that your brand could be part of the $154 per week South Asian’s shopping basket? Or that you can share the $136 per week Chinese shopping basket who together have a household spending of $67 billion annually? (Information courtesy of Environics Analytics). Overcoming the mindsets So, let’s get our priorities back on track and get over a few mindsets. Mindset 1. “My proposition and message are broad enough to include all or most audience segments, so why would I need to nuance them?” Well, would you treat the Quebec market the same as the rest of Canada? Did you know that 1 in 5 Canadians speak a second language other than English? The other language is not French, but another, non-official language. According to the Office of the Commissioner of Official Languages these are, in rank order: Mandarin, Cantonese and Punjabi. These non-official-language speakers are presently concentrated in the Greater Toronto Area and in Metro Vancouver. But as employment opportunities spread out across the country, along with the need for more affordable housing, expect to see immigrants speaking other languages make their homes in other communities. Each immigrant culture is as distinct as the French culture. Each having diverse unique consumption behaviours, attitudes towards products, motivations and stimuli as the Franco-Canadian market. It’s never a one-size-fits-all proposition. If you find yourself needing a proposition that fits and motivates French-Canadians more ❱ DMN.ca

appropriately, how much more so cultures that are so much more diverse that form a significant segment of our target market. For example, to offer a “Gen Pop” proposition and message of a flexible mortgage, where you can skip a payment, to an Asian audience would be ridiculous. Asian cultures hate debt and want to pay off their debt as soon as possible. Mindset 2. “I know that the ethnic audiences are important to me, so I will set aside part of my marketing budget to target them”. Is there any market that is growing at more than a quarter of a million consumers each year? Millennials? Boomers? It’s in fact, Immigrants. The largest source regions being the South Asian continent, China, the Philippines, Middle East and South America. Each bringing in their distinct cultures and habits. All potential consumers. Every one of them needing a new bank account, a mobile phone, clothes appropriate to their new environment, a place to buy groceries (their groceries), a means to commute and eventually a home they can call their own: the final anchor in their new land. So, the question to ask yourself is, “Have I examined where my real market lies?” For example, if I were marketing to new mothers or young parents, who would these be? The profile of most immigrants are young singles or couples. Likely, as part of their new life they would, if single, contemplate marriage and having a baby shortly after, or if a couple, they would have waited to settle in the first year and then have a baby or they have already arrived with kids, to fulfill their Canadian dream. Would not this market be far larger “segment” than what is called the “mainstream” market? Why would you set aside a small part of your budget to market to the far larger audience? Should you not be recalibrating your ROI?

Mindset 3. “OK, I know Canada is a mosaic of diverse ethnic cultures and that’s why I feature them in my advertising. That would certainly check off the ‘inclusion’ box for me”. But does it really? Is segment representation the same as segment targeting? Let me illustrate through an ad campaign that IKEA ran a couple of years ago. The 30-second spot showed a young South Asian couple entering a cramped tiny home and discovering that with IKEA they could get ideas to furnish it to their taste. Finally, the camera zooms out to reveal how small the home really was. It was, in fact, a cottagey-type tiny home in the wilderness (on Georgian Bay)! So, what’s wrong with this ad that checks off the inclusion box by using a couple from the Millennial generation who also looked ethnic, both big markets for the brand? Nothing. But it also does nothing. IKEA is a store and brand that is certainly a favourites with South Asians, whether newcomers or “New Canadians”. The Millennials shown in the ad are also relatable to the new generation of South Asian immigrants. But South Asians, especially those who have moved to Canada recently, are generally urban and the concept of a tiny modern cottage home in cottage country is certainly not their idea of an aspiration or fulfilment of The Canadian Dream. In fact, they would not even consider a starter home of this kind! The ethnic group featured in the ad may see themselves in the ad and feel good about it, but then realize it’s really not talking to them. This ad would have passed over a big chunk of IKEA’s very lucrative market. A missed opportunity for IKEA to have engaged their huge potential South Asian or other ethnic segment by representation but not targeting.

Mindset 4. “Most multicultural segments are exposed to general media, so it may not be necessary to target them specifically in ethnic media as well.” Yes, it is true that the majority of the population, including multicultural audiences, are exposed to mainstream media channels. But here are a few questions to ask. What engagement channels are they really “consuming”? MasterChef Canada or “MasterChef meets HomeChef” on Fairchild TV, with chef Denice and food blogger Bosco Mo? Or Celebrity Nutritionist Jojo Wang? Does Instagram or WeChat have a stronger influence on them? How much of the impact of communication is being lost due to these channels not being the ones they are used to having a deeper engagement with, where they are usually used to receiving messages specifically targeted to them? Like a few other cultural segments, the larger part of the Chinese audience in Canada have high language dependency or preference to be engaged in their native language. They may be exposed to “mainstream” media because it is everywhere, but that does not mean they consume it. The lack of fluency in English (or French) is a major barrier to their comprehension of media in those languages. While a small segment of the 1.7 million Chinese population in Canada do consume mainstream TV programmes and are exposed to out of home media, where are their decisions being influenced? Would you be losing out on connecting with almost 5% of Canada’s consumers? In conclusion I would like to suggest, that on embarking on your next marketing plan, please consider the question, in the title of this article, “Is my Plan really complete?” Ishan Ghosh is guru, pundit, partner and CEO,

barrett and welsh (www.barrettandwelsh.com). Advocate for diversity and inclusion. October 2019