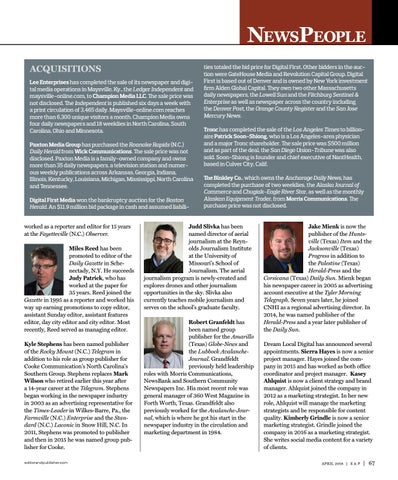 NewsPeople ACQUISITIONS Lee Enterprises has completed the sale of its newspaper and digital media operations in Maysville, Ky., the Ledger Independent and maysville-online.com, to Champion Media LLC. The sale price was not disclosed. The Independent is published six days a week with a print circulation of 3,465 daily. Maysville-online.com reaches more than 6,300 unique visitors a month. Champion Media owns four daily newspapers and 18 weeklies in North Carolina, South Carolina, Ohio and Minnesota. Paxton Media Group has purchased the Roanoke Rapids (N.C.) Daily Herald from Wick Communications. The sale price was not disclosed. Paxton Media is a family-owned company and owns more than 35 daily newspapers, a television station and numerous weekly publications across Arkansas, Georgia, Indiana, Illinois, Kentucky, Louisiana, Michigan, Mississippi, North Carolina and Tennessee. Digital First Media won the bankruptcy auction for the Boston Herald. An $11.9 million bid package in cash and assumed liabiliworked as a reporter and editor for 15 years at the Fayetteville (N.C.) Observer. Miles Reed has been promoted to editor of the Daily Gazette in Schenectady, N.Y. He succeeds Judy Patrick, who has worked at the paper for 35 years. Reed joined the Gazette in 1995 as a reporter and worked his way up earning promotions to copy editor, assistant Sunday editor, assistant features editor, day city editor and city editor. Most recently, Reed served as managing editor. Kyle Stephens has been named publisher of the Rocky Mount (N.C.) Telegram in addition to his role as group publisher for Cooke Communication’s North Carolina’s Southern Group. Stephens replaces Mark Wilson who retired earlier this year after a 14-year career at the Telegram. Stephens began working in the newspaper industry in 2003 as an advertising representative for the Times-Leader in Wilkes-Barre, Pa., the Farmville (N.C.) Enterprise and the Standard (N.C.) Laconic in Snow Hill, N.C. In 2011, Stephens was promoted to publisher and then in 2015 he was named group publisher for Cooke. editorandpublisher.com

ties totaled the bid price for Digital First. Other bidders in the auction were GateHouse Media and Revolution Capital Group. Digital First is based out of Denver and is owned by New York investment firm Alden Global Capital. They own two other Massachusetts daily newspapers, the Lowell Sun and the Fitchburg Sentinel &amp; Enterprise as well as newspaper across the country including the Denver Post, the Orange County Register and the San Jose Mercury News. Tronc has completed the sale of the Los Angeles Times to billionaire Patrick Soon-Shiong, who is a Los Angeles-area physician and a major Tronc shareholder. The sale price was $500 million and as part of the deal, the San Diego Union-Tribune was also sold. Soon-Shiong is founder and chief executive of NantHealth, based in Culver City, Calif. The Binkley Co., which owns the Anchorage Daily News, has completed the purchase of two weeklies, the Alaska Journal of Commerce and Chugiak-Eagle River Star, as well as the monthly Alaskan Equipment Trader, from Morris Communications. The purchase price was not disclosed.

Judd Slivka has been named director of aerial journalism at the Reynolds Journalism Institute at the University of Missouri’s School of Journalism. The aerial journalism program is newly-created and explores drones and other journalism opportunities in the sky. Slivka also currently teaches mobile journalism and serves on the school’s graduate faculty. Robert Granfeldt has been named group publisher for the Amarillo (Texas) Globe-News and the Lubbock AvalancheJournal. Grandfeldt previously held leadership roles with Morris Communications, NewsBank and Southern Community Newspapers Inc. His most recent role was general manager of 360 West Magazine in Forth Worth, Texas. Grandfeldt also previously worked for the Avalanche-Journal, which is where he got his start in the newspaper industry in the circulation and marketing department in 1984.

Jake Mienk is now the publisher of the Huntsville (Texas) Item and the Jacksonville (Texas) Progress in addition to the Palestine (Texas) Herald-Press and the Corsicana (Texas) Daily Sun. Mienk began his newspaper career in 2005 as advertising account executive at the Tyler Morning Telegraph. Seven years later, he joined CNHI as a regional advertising director. In 2014, he was named publisher of the Herald-Press and a year later publisher of the Daily Sun. Dream Local Digital has announced several appointments. Sierra Hayes is now a senior project manager. Hayes joined the company in 2015 and has worked as both office coordinator and project manager. Kasey Ahlquist is now a client strategy and brand manager. Ahlquist joined the company in 2012 as a marketing strategist. In her new role, Ahlquist will manage the marketing strategists and be responsible for content quality. Kimberly Grindle is now a senior marketing strategist. Grindle joined the company in 2016 as a marketing strategist. She writes social media content for a variety of clients. APRIL 2018 | E &amp; P 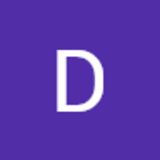