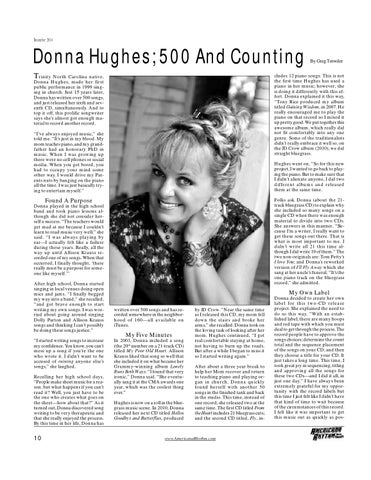 cludes 12 piano songs. This is not the first time Hughes has used a piano in her music; however, she is doing it differently with this effort. Donna explained it this way, “Tony Rice produced my album titled Gaining Wisdom, in 2007. He really encouraged me to play the piano on that record so I mixed it up pretty good. We put together this awesome album, which really did not fit comfortably into any one genre. Some of the traditionalists didn’t really embrace it well so, on the JD Crow album (2010), we did straight bluegrass.

Donna Hughes, made her first public performance in 1999 singing in church. Just 15 years later, Donna has written over 500 songs, and just released her sixth and seventh CD, simultaneously. And to top it off, this prolific songwriter says she’s almost got enough material to record another record. “I’ve always enjoyed music,” she told me. “It’s just in my blood. My mom teaches piano, and my grandfather had an honorary PhD in music. When I was growing up there were no cell phones or social media. When you got bored, you had to occupy your mind some other way. I would drive my Parents nuts by banging on the piano all the time. I was just basically trying to entertain myself.”

Hughes went on, “So for this new project, I wanted to go back to playing the piano. But to make sure that I didn’t alienate anyone, I did two different albums and released them at the same time.

Folks ask Donna (about the 21track bluegrass CD) to explain why she included so many songs on a single CD when there was enough material to divide into two CDs. She answers in this manner, “Because I’m a writer, I really want to get these songs out there. That is what is most important to me. I didn’t write all 21 this time although I did write 19 of them.” The two non-originals are: Tom Petty’s I love You; and Donna’s reworked version of I’ll Fly Away which she sang at her uncle’s funeral. “It’s the one piano track on the bluegrass record,” she admitted.

Donna played in the high school band and took piano lessons although she did not consider herself a success. “The teachers would get mad at me because I couldn’t learn to read music very well,” she said. “I was always playing by ear—I actually felt like a failure during those years. Really, all the way up until Allison Krauss recorded one of my songs. When that occurred, I finally thought, ‘there really must be a purpose for someone like myself.’” After high school, Donna started singing in local venues doing open mics and jams. “I finally begged my way into a band,” she recalled, “and got brave enough to start writing my own songs. I was worried about going around singing Dolly Parton and Allison Krauss songs and thinking I can’t possibly be doing these songs justice.” “I started writing songs to increase my confidence. You know, you can’t mess up a song if you’re the one who wrote it. I didn’t want to be accused of ruining anyone else’s songs,” she laughed. Recalling her high school days, “People make sheet music for a reason, but what happens if you can’t read it? Well, you just have to be the one who creates what goes on the sheet—how about that?” As it turned out, Donna discovered song writing to be very therapeutic and that she really enjoyed the process. By this time in her life, Donna has

written over 500 songs and has recorded somewhere in the neighborhood of 160—all available on iTunes.

In 2003, Donna included a song (the 20th number on a 21-track CD) titled My Poor Old Heart. Allison Krauss liked that song so well that she included it on what became her Grammy-winning album Lonely Runs Both Ways. “I found that very ironic,” Donna said. “She eventually sang it at the CMA awards one year, which was the coolest thing ever.” Hughes is now on a roll in the bluegrass music scene. In 2010, Donna released her next CD titled Hellos Goodbys and Butterflies, produced

by JD Crow. “Near the same time as I released this CD, my mom fell down the stairs and broke her arms,” she recalled. Donna took on the loving task of looking after her mom. Hughes continued, “I got real comfortable staying at home, not having to burn up the roads. But after a while I began to miss it so I started writing again.” After about a three year break to help her Mom recover and return to teaching piano and playing organ in church, Donna quickly found herself with another 50 songs in the finished tank and back in the studio. This time, instead of one record, she released two at the same time. The first CD titled From the Heart includes 21 bluegrass cuts; and the second CD titled, Fly, in-

Donna decided to create her own label for this two-CD release project. She explained the need to do so this way, “With an established label, there are many hoops and red tape with which you must deal to get through the process. The record people have to approve the songs choices; determine the count total and the sequence placement of the songs on your CD; and then they choose a title for your CD. It just takes a long time. This time, I took great joy in sequencing, titling and approving all the songs for these two CDs—and I did it all, in just one day.” I have always been extremely grateful for my opportunity with the record labels but this time I just felt like I didn’t have that kind of time to wait because of the circumstances of this record. I felt like it was important to get this music out as quickly as pos- 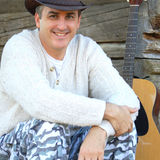